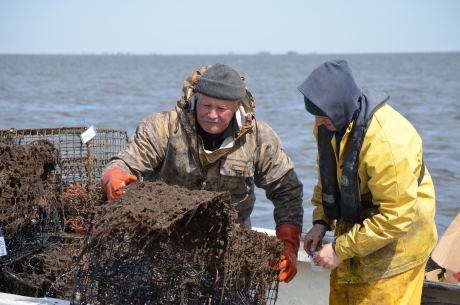 This year's funded projects are:

Aleut Community of St. Paul Island (Alaska, $113,393) will remove at least 30,000 pounds of marine debris from shoreline and beach habitat. The community will also conduct shoreline monitoring in critical and sensitive habitat for marine mammals including northern fur seals, steller sea lions and harbor seals. This project is the first marine debris removal effort on Otter Island and the first effort to transport debris off St. George Island.

Guam Environmental Protection Agency (Guam, $250,000), in partnership with the Guam Department of Agriculture, Division of Aquatic and Wildlife Resources, will remove a nearly 50-year old tire reef in the Manell-Geus Habitat Focus Area, an area widely used for recreation, fisheries, and commercial tourism. The proposed removal target - a tire reef created in the 1970's by fisheries scientists as an experiment to increase fish stocks - carries the risk of creating more debris that damages sensitive habitats and species and is a source of heavy metal contamination.

Lake Pontchartrain Basin Foundation (Louisiana, $169,259) will remove approximately 6000 derelict crab traps from the Pontchartrain Basin in Louisiana through a partnership with the Virginia Institute of Marine Science and community volunteers. The project team will collect biological data on contents, location, and condition of traps, which will be valuable for determining the economic impact of the lost traps.

New York City Department of Parks and Recreation (New York, $150,000) will remove 441,000 pounds of medium-to-large debris at two critical salt marsh sites in Queens, NY. The project consists of three components: 1) contractor removal of large to- medium debris, including at least six boats, 2) a volunteer project to remove smaller debris with approximately 25 volunteers, and 3) pre- and post-removal monitoring to assess improvements to ecosystem health and determine the need for post-removal restoration at the sites.

Swinomish Indian Tribal Community (Washington, $75,000) will inventory, remove, and repurpose (when possible) derelict fishing gear and fishing-related marine debris in the Swinomish Channel and Similk Bay, located within the Swinomish Indian Tribal Community in Washington State. They will also develop and implement a prevention plan to protect the docks, keep them free of gear and debris and provide a monitoring and enforcement mechanism that will ensure that those guidelines are followed.

Click the bars below to view projects financed in that year.

Grantee: Stockton University ($226,299) will work with crabbers to remove derelict crab pots using low cost sonar in coastal New Jersey. This project builds off previous relationships built within the commercial crabbing industry to engage the younger, next generation fishermen by incorporating best practices into their behaviors.

Grantee: Town of Beaufort ($67,889) will remove over 46,000 pounds of debris, including abandoned moorings, derelict vessels, fishing gear, and other large debris from the waters adjacent to the Rachel Carson Reserve in North Carolina. The project builds on previous efforts in the reserve to map and prioritize debris for removal.

Grantee: Southwest Wetlands Interpretive Association ($100,553) will implement land-based marine debris capture and removal through mechanical and hand-removal methods within the Tijuana River National Estuarine Research Reserve in California. This project builds on previous efforts and will include continued engagement with the Mexican Government, industry leads, Mexican NGOs, and a broad section of the international community.

Grantee: Weeks Bay Foundation, Inc. ($50,000) will remove five abandoned and derelict vessels from the Weeks Bay National Estuarine Research Reserve in Alabama, as well as perform outreach in the surrounding community on the damage these vessels cause, and how to properly report an abandoned vessel.

Grantee: Southeastern Association of Fish and Wildlife Agencies ($99,300) will remove a large swath of man-made and woody debris from the Pearl River and the nearby Bogue Chitto National Wildlife Refuge in Mississippi. The removal is key to restore hydrologic functions to the river and provide passage for fish.

Grantee: Hawai’i Wildlife Fund ($231,660) will remove 112 metric tons of derelict fishing gear and other medium and large scale debris from the shorelines of Hawai’i, Kaua'i, Maui, and Lana'i islands through a derelict net patrol and community-based cleanup events. The nets will be disposed of through the Nets-to-Energy program, which incinerates the nets for energy.

The Ghost Trap Rodeo: Competitions to Find and Remove Ghost Fishing Gear and Marine Debris from the Tampa Bay Estuary

Grantee: Ocean Aid 360, Inc. ($89,295) will mobilize a diverse group of boaters, anglers, industry, and more to remove 15,000 pounds of derelict crab traps and other fishing gear from Florida’s Tampa Bay estuary. Following the removal activities, data will be collected on the species removed from the crab traps.

Grantee: Northwest Straits Marine Foundation ($221,200) will build on previous efforts to remove at least 1,000 derelict crab pots from the Salish Sea in Washington State. The project will include a robust outreach campaign targeting recreational fishers, preventing the reaccumulation of crab pots.

Grantee: Partners for Clean Streams, Inc. ($62,904) will remove 30,000 pounds of marine debris from the Maumee River and other tributaries in the greater Toledo, Ohio metropolitan area, helping to prevent debris from impacting western Lake Erie. Partners for Clean Streams will work closely with partners to detect, assess, and coordinate removal of this marine debris with volunteers through the "Clean Your Streams" program.

Grantee: Center for Coastal Studies, Inc. ($128,440) will remove 16 tons of derelict fishing gear from Cape Cod Bay, and the nearby Cape Cod National Seashore in Massachusetts. The project will engage commercial and recreational fishers, students, and other coastal interest groups in the removal activities.

Grantee: Save Our Shores ($52,032) will organize volunteer cleanups both from land and water to remove a minimum of seven tons of debris from three waterways leading into the Monterey Bay National Marine Sanctuary in Monterey, California. Additionally, they will conduct education programs in schools and outreach with communities adjacent to their target waterways to raise awareness of the issue and the threat it poses to the sanctuary.

Grantee: The County of Prince George ($150,000) will install two floating litter traps in the Anacostia River in Maryland to reduce the debris loads flowing downstream towards the Potomac River and eventually the Chesapeake Bay. The County will also monitor the effectiveness of this removal approach, and increase public awareness of marine debris through local outreach and education programs.

Removal of a Derelict Fishing Vessel from the Saipan Lagoon

Grantee: Pacific Coastal Research and Planning ($250,000) will work with a contractor to remove an 83 foot derelict fishing vessel that is grounded in and damaging sensitive coral reef habitat in the Port of Saipan of the Northern Mariana Islands. A local media campaign will be used to highlight the removal project to the public and share ways to prevent marine debris in the future, such as proper storm preparation.

Moving Toward a Litter-free Mardi Gras in Alabama

Grantee: Mobile Baykeeper Inc. ($56,013) will conduct an initial debris assessment, hold extensive debris removal cleanups, and monitor One Mile Creek, in Mobile, Alabama. They will also work to increase awareness about the issue with a campaign targeted towards the City of Mobile’s Mardi Gras celebration and will install temporary storm drain debris barriers during Mardi Gras in 2017 and 2018 to reduce debris entering the waterways.

Grantee: Island Trails Network ($71,479) will work with an estimated 200 community volunteers and students to remove 8-12 tons from an 80-mile stretch of coastline, totaling about 28 linear miles, on northeastern Kodiak Island, Alaska. This funding allows ITN to build off of previous community-based removal efforts on neighboring Tugidak and Shuyak Islands.

Grantee: The Cornell Cooperative Extension Association of Suffolk County ($120,000) will continue their successful and long-running efforts to remove and quantify the extent and distribution of derelict lobster gear in the New York and Connecticut waters of Long Island Sound. Working with commercial lobstermen, the project will remove over 100 metric tons of derelict gear debris.

Grantee: Cleveland Metroparks ($108,100) will remove 6,250 tons of concrete slabs and metal from Euclid Beach Park on the shores of Lake Erie. They will also be conducting at least 10 volunteer beach cleanups each year of the project and creating an educational display to help the public understand the effects of plastic pollution in Lake Erie.

Grantee: The Camden County Municipal Utilities Authority ($67,000) will remove ~20 tons of marine debris, largely in the form of concrete rubble, from the shoreline and surrounding waters of an industrial waste site in the City of Camden, New Jersey. The removal is key for converting the site into a public park and restoring coastal habitat.

Removal of Sunken Derelict Vessels from the Makah Marina at Neah Bay, WA

Grantee: Sitka Sound Science Center ($175,000) will work with teams of local, trained crew and volunteers to remove approximately 33 tons of marine debris from shorelines in and around the communities of Port Heiden, St. Paul, and Savoonga in the Bering Sea.

Cleanup and Retrieval of Derelict Crab Pots in Gastineau Channel

Grantee: Douglas Indian Association ($33,812) will survey, map, and remove up to 400 derelict crab pots from the Gastineau Channel between Douglas Island and Juneau, Alaska.

Grantee: North Carolina Department of Environmental Quality ($40,768) will conduct unmanned aerial surveys to identify and map medium and large marine debris items to prioritize for removal within the Rachel Carson Reserve component of the North Carolina National Estuarine Research Reserve. Approximately six tons of priority marine debris will be removed and adjacent habitat will be monitored for recovery.

Grantee: Center for Coastal Studies ($95,283) will work with the Massachusetts Division of Marine Fisheries as well as commercial and recreational fishermen to identity, remove, document, and properly dispose of approximately 17 tons of derelict fishing gear from Massachusetts Bay and Cape Cod Bay.

Grantee: Puerto Rico Department of Natural and Environmental Resources ($66,672) will assess, map, and remove five 30- to 46-foot abandoned and derelict vessels in Fajardo Bay, Puerto Rico. The adjacent coral and seagrass habitats will then be monitored for recovery. Outreach with the boating community will also be conducted to educate boaters about how to prevent vessel groundings and derelict vessels.

Grantee: Southwest Wetlands Interpretive Association ($90,000) will conduct maintenance and provide upgrades to the existing trash capture infrastructure in the Goat Canyon Sediment Basin of the U.S. portion of the Tijuana River. They will also lead two month-long community cleanup events to remove an estimated five tons of debris from surrounding natural habitats. Outreach regarding waste management and marine debris will be conducted with stakeholders in Mexico through binational communication.

Grantee: University of Wisconsin Sea Grant ($36,599) will implement strategies to identify and locate derelict fishing nets for removal, including the development and distribution of derelict net marking kits for local anglers and the installation of sonar and video equipment on vessels. At least ten large nets totaling at least five tons will be removed from Lake Superior.

Cape May and Beyond: Ghost Crab Pot Removal in the Delaware Bay, Cape May Reef, and Southern Coastal New Jersey Bays

Grantee: Delaware Department of Natural Resources and Environmental Control, Division of Fish and Wildlife ($90,000) will work with local commercial crabbers to survey, map, and remove up to 2,000 derelict crab pots from coastal areas near Dover, on the Delaware side of Delaware Bay. Education and outreach with the recreational boating and crabbing communities will also be conducted to prevent future derelict fishing gear.