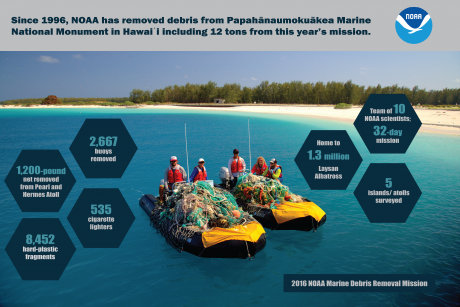 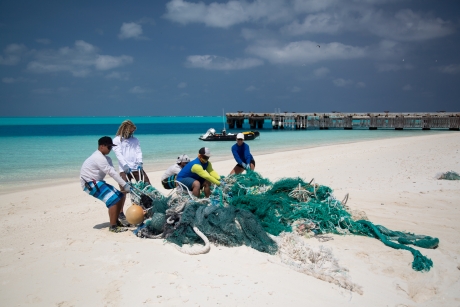 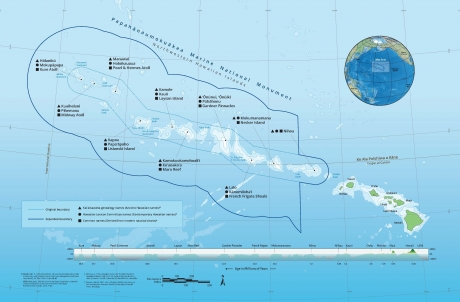 The Hawaiian Islands are located in the North Pacific Gyre and are the most remote island chain in the world, yet the beaches are littered with marine debris, including the shores of the largely uninhabited Papahānaumokuākea Marine National Monument (monument). The North Pacific Gyre carries marine debris from all over the Pacific Ocean to Hawaii, and because of where these islands are located within the gyre, it receives very large amounts. NOAA has conducted marine debris removal missions with partners in the monument since 1996. How often and intense these efforts have been depends on the labor, available ship time, and partners. Since 1996, NOAA has removed a total of 923,000 metric tons of debris through near annual missions. That’s equivalent to about ten adult, blue whales which is the largest animal on the planet!

During research missions in the monument from 1996-1999, small supplemental efforts to remove marine debris began. These efforts grew and in 2004 NOAA’s Pacific Islands Fisheries Science Center (PIFSC) removed 116 metric tons of debris from the islands. After 2005, the mission scaled back into maintenance mode with a focus on keeping pace with new marine debris building up on shorelines and resurveying areas with historically high amounts of marine debris.

In July 2005, the M/V (Motor Vessel) Casitas, a 145-foot ship chartered by NOAA for marine debris removal, ran aground at Pearl and Hermes Atoll. None of the personnel on board— including PIFSC divers—were injured, but the ship damaged coral when it grounded. Following the vessel’s removal, NOAA scientists participated in field assessment studies to determine the extent of the impacts and potential for restoration activities. NOAA’s Damage Assessment Remediation and Restoration Program (DARRP), a program composed of groups out of several NOAA offices that protects and restores injured natural resources at hazardous waste sites, oil spills, and vessel groundings, stepped in to continue the assessment. In the spring of 2011, DARRP issued a final restoration plan to restore coral injuries caused by the grounding. In forming the plan, the resource trustees determined that removing nets from the reefs at Pearl and Hermes Atoll and surrounding atolls compensated for the injuries incurred during the M/V Casitas's grounding and subsequent response. Any settlement from the responsible party would go toward additional net removal missions. The missions scaled back up that year with DARRP funding from the M/V Casitas settlement and with additional support from the Papahānaumokuākea Marine National Monument and NOAA’s Marine Debris Program (MDP).

With the renewed support, the PIFSC crew again pulled about 81 metric tons of derelict from the shallow waters and corals from 2011-2013. “Everyone has the same goal, here,” said Matthew Parry, a NOAA Fisheries biologist and lead for the DARRP restoration funds. “We want to remove nets and marine debris from that area, so we said, ‘let's get some economies of scale, pool our resources for a combined effort, and stretch these dollars further'; what we've gotten is a much, much larger level of response in net removal than we ever expected to do on our own.”

In September 2014, a team of 17 scientists and trained divers from PIFSC and two of the MDP’s own staff embarked on a 33-day mission to remove derelict fishing nets and plastics from the sensitive reefs, shallow waters, and shorelines of the monument. Divers undergo extensive training and rigorous physical assessments to become part of the mission. The crew made its way there aboard the NOAA Ship Oscar Elton Sette and removed debris from five areas: Maro Reef (Kamokuokamohoali‘i, Ko‘anako‘a), Laysan Island (Kamole, Kauō), Lisianski Island (Kapou, Papa‘āpoho), Pearl and Hermes Atoll (Manawai, Holoikauaua), and Midway Atoll (Kuaihelani, Pihemanu)*.

The team disembarked from the NOAA Ship Oscar Elton Sette at each location and worked in teams from small boats, conducting in-water surveys and pulling nets weighing hundreds of kilograms from the corals and seafloor. At islands and atolls where there is some land, such as Midway Atoll and Laysan Island, the team conducted shoreline cleanups and surveys. PIFSC, in cooperation with the MDP, started a study to understand the amount of marine debris accumulating on the shorelines of Midway.

The marine debris removal mission of 2016 yielded nearly 11 metric tons of debris from the monument. Ten NOAA scientists were a part of the removal effort that spanned 32 days. “This cross-agency effort to remove debris is a tremendous undertaking and it emphasizes the need to focus efforts on marine debris prevention to stop debris from showing up on these once pristine shorelines,” said MDP Pacific Islands Regional Coordinator, Mark Manuel.

In September 2018, the most recent marine debris removal mission took place. The 41-day, three-leg, large-scale mission to survey and remove debris from the monument began. With two ships, NOAA PIFSC divers and scientists successfully removed over 74 metric tons of debris from the shorelines and shallow coral reefs of the monument. Additionally, the removal team conducted a pilot study using unmanned aerial systems to locate derelict fishing gear and investigate the usefulness of using the technology. Some of the derelict fishing gear removed included 10,596 buoys and floats, 7,797 oyster aquaculture spacers, and 2,575 nets and net fragments.

Through a collective effort, the 2018 mission built upon the long history of removal efforts in the monument. “The biggest accomplishment of the 2018 mission was the willingness of all co-managers of Papahānaumokuākea Marine National Monument to collaborate and share our limited resources to maximize the effort we were able to put forth in conserving and protecting the wildlife and its habitat,” shared James Morioka, Operation Manager, Ecosystem Sciences Division, PIFSC, Joint Institute for Marine and Atmospheric Research. “I have great hope for this project because people care about the monument, about Hawaii, and about the wildlife and environment in which they call home. Maintenance of these critical coral reefs and shoreline habitats are vital to the effective management and survival of these sensitive ecosystems. Just like if your neighborhood trash pick-up discontinued service, the available real estate you occupy and rely on would diminish, and your habitat and welfare would diminish. Maintenance is cheap. Restoration is not.”

*It is important to use the ancient, contemporary, and common names of the islands to acknowledge the historical and cultural significance of Papahānaumokuākea Marine National Monument. Learn more about the ancient and contemporary Hawaiian names.