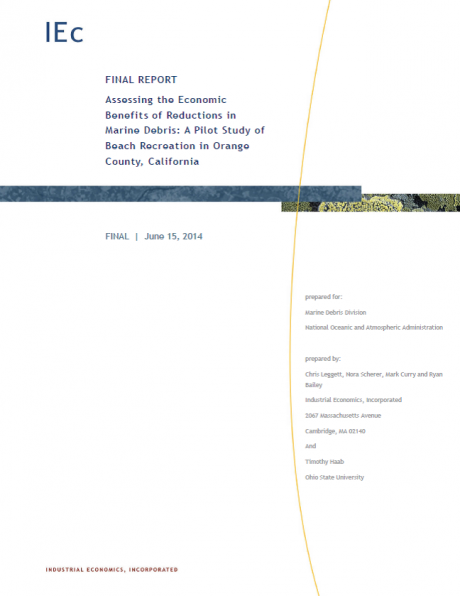 The NOAA Marine Debris Program economic study shows that it can also have considerable economic costs to residents who use their local beaches. The study found that Orange County, California residents lose millions of dollars each year avoiding littered, local beaches in favor of choosing cleaner beaches that are farther away and may cost more to reach. Reducing marine debris even by 25 percent at beaches in and near Orange County could benefit residents roughly $32 million during three months in the summer. In order to better understand the economic cost of marine debris on coastal communities, the NOAA Marine Debris Program and Industrial Economics, Inc. (IEc) designed a study that examines how marine debris influences people’s decisions to go to the beach and what it may cost them. We selected Orange County as a study location because beach recreation is an important part of the local culture and residents have a wide variety of beaches from which to choose, some of which are likely to have high levels of marine debris. We found that: • Orange County residents are concerned about marine debris, and it significantly influences their decisions to go to the beach. No marine debris on the beach and good water quality are the two most important beach characteristics to them. • Avoiding littered beaches costs Orange County residents millions of dollars each year. • Reducing marine debris on beaches can prevent financial loss and provide economic benefits to residents.