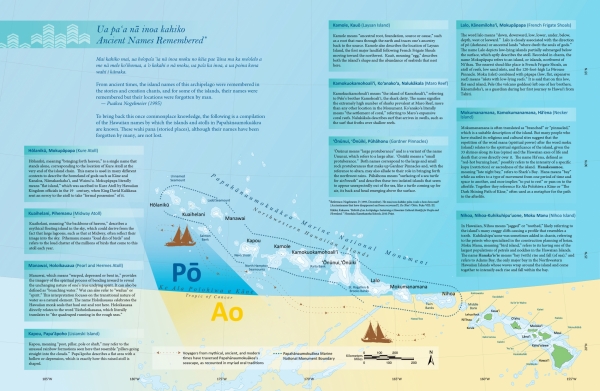 This image appears in our Photo Gallery in the following section(s):

To bring back this once commonplace knowledge, the following is a compilation of the Hawaiian names by which the islands and atolls in Papahānaumokuākea are known. These wahi pana (storied places), although their names have been forgotten by many, are not lost.

Hōlanikū, meaning "bringing forth heaven," is a single name that stands alone, corresponding to the location of Kure Atoll at the very end of the island chain. This name is used in many different contexts to describe the homeland of gods such as Kāne and Kanaloa, Nāmakaokaha‘i, and Wainu‘u. Mokupāpapa literally means "flat island," which was ascribed to Kure Atoll by Hawaiian Kingdom officials in the 19th century, when King David Kalākaua sent an envoy to the atoll to take "formal possession" of it.

Kuaihelani, meaning "the backbone of heaven," describes a mythical floating island in the sky, which could derive from the fact that large lagoons, such as that at Midway, often reflect their image into the sky. Pihemanu means "loud din of birds" and refers to the loud chatter of the millions of birds that come to this atoll each year.

Manawai, which means "warped, depressed or bent in," provides the imagery of the spiritual process of bending inward to reveal the unchanging nature of one's true undying spirit. It can also be defined as "branching water." Wai can also refer to "wailua" or "spirit." This interpretation focuses on the transitional nature of water as a natural element. The name Holoikauaua celebrates the Hawaiian monk seals that haul out and rest here. Holoikauaua directly relates to the word ‘ilioholoikauaua, which literally translates to "the quadruped running in the rough seas."

Kapou, meaning "post, pillar, pole or shaft," may refer to the unusual rainbow formations seen here that resemble "pillars going straight into the clouds." Papa‘āpoho describes a flat area with a hollow or depression, which is exactly how this raised atoll is shaped.

Kamole means "ancestral root, foundation, source or cause," such as a root that runs through the earth and traces one's ancestry back to the source. Kamole also describes the location of Laysan Island, the first major landfall following French Frigate Shoals moving toward the northwest. Kauō, meaning "egg," describes both the island's shape and the abundance of seabirds that nest here.

than any other location in the Monument. Ko‘anako‘a literally means "the settlement of coral," referring to Maro's expansive coral reefs. Nalukākala describes surf that arrives in swells, such as the surf that froths over shallow reefs.

‘Ōnūnui means "large protuberance" and is a variant of the name Ununui, which refers to a large altar.  ‘Ōnūiki means a "small protuberance." Both names correspond to the large and small rock protuberances that make up Gardner Pinnacles and, with the reference to altars, may also allude to their role in bringing forth the northwest rains. Pūhāhonu means "surfacing of a sea turtle for air/breath" and describes these two isolated islands that seem to appear unexpectedly out of the sea, like a turtle coming up for air, its back and head emerging above the surface.

The word lalo means "down, downward, low, lower, under, below, depth, west or leeward." Lalo is closely associated with the direction of pō (darkness) or ancestral lands "where dwell the souls of gods." The name Lalo depicts low-lying islands partially submerged below the surface, which aptly describes the atoll. Recorded in chants, the name Mokupāpapa refers to an island, or islands, northwest of Ni‘ihau. The nearest shoal-like place is French Frigate Shoals, an atoll of reefs, low sand islets, and the 120-foot-high La Pérouse Pinnacle. Moku (islet) combined with pāpapa (low, flat, expansive reef) means "islets with low-lying reefs." It is said that on this low, flat sand island, Pele (the volcano goddess) left one of her brothers, Kānemiloha‘i, as a guardian during her first journey to Hawai‘i from Tahiti.

Mokumanamana is often translated as "branched" or "pinnacled," which is a suitable description of the island. But many people who have studied its religious and cultural sites suggest that the repetition of the word mana (spiritual power) after the word moku (island) relates to the spiritual significance of the island, given the 33 shrines along its kua (spine) and the Hawaiian axes of life and death that cross directly over it. The name Hā‘ena, defined as "red-hot burning heat," possibly refers to the intensity of a specific kapu (restriction) or sacredness of the island. Hanakeaumoe, meaning "late night bay” refers to Shark's Bay. Hana means "bay" while au refers to a type of movement from one period of time and

space to another, and moe implies "to put to rest" or pass on to the afterlife. Together they reference Ke Ala Polohiwa a Kāne or "The Dark Shining Path of Kāne," often used as a metaphor for the path to the afterlife.

In Hawaiian, Nihoa means "jagged" or "toothed," likely referring to the island's many craggy cliffs causing a profile that resembles a tooth. Kuhikuhipu‘uone was sometimes added in chants, referring

to the priests who specialized in the construction planning of heiau. Moku Manu, meaning "bird island," refers to its having one of the largest populations of petrels and noddies in the Hawaiian Islands. The name Hanaka‘ie‘ie means "bay (with) rise and fall (of sea)," and refers to Adams Bay, the only major bay in the Northwestern Hawaiian Islands whose waves wrap around the island and come together to intensify each rise and fall within the bay.