Marine debris can cause a lot of problems for people, ecosystems, and our economy. It especially impacts wildlife. Marine debris has been documented by Gall and Thompson to impact more than 700 species, from coastal vegetation, to plankton, invertebrates, fish, cetaceans, sea turtles and seabirds. Some wildlife become entangled in fishing nets and plastic packing bands, such as whales, turtles, and other species. These types of debris may wrap around animals, make it difficult for them to swim, and cut into their bodies. Derelict fishing gear can also continue to trap fish and other animals, called ghost fishing, after it is out of the control of a fisher.

Many marine debris items can also impact wildlife through ingestion. When an animal swallows debris, it can block their stomach, puncture the inside of their bodies with sharp edges, and even create a false sense of being full. This can make the animal ill or cause it to starve. Animals, such as turtles, may mistake balloons or plastic bags for their prey. As plastic debris breaks up into smaller pieces, it is easier for smaller and smaller species, such as zooplankton, to eat.

Some debris, such as abandoned and derelict vessels, can be dangerous for habitats and boaters alike. Some sunken vessels may be difficult to see in the water, causing collisions in navigation channels and damage to other vessels. Large debris including derelict fishing gear, vessels, and appliances can crush and smother sensitive habitats, such as coral reefs.

Some marine debris can even pick up “hitchhikers” and transport non-native species. These are organisms that attach themselves to marine debris and travel to areas where they otherwise would not be found.

Marine debris can impact our economy. Dirty beaches can affect tourism and recreation, the largest employer in the ocean and Great Lakes economy. This sector relies heavily on healthy coastal and ocean resources as well as the aesthetic quality of the environment.

Marine debris can also be harmful to human health. Debris that is sharp or contains hazardous substances can hurt people at play or in the water. There could also be plastic in the seafood we eat. However, the health risks associated with different plastics and chemicals to people are still unknown. 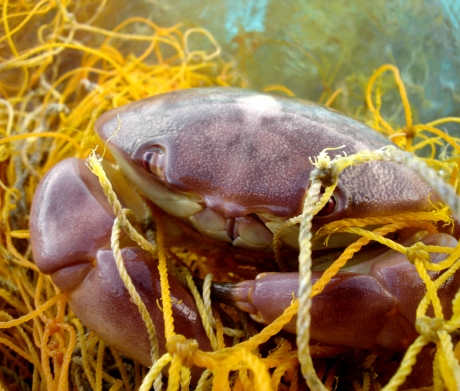 Learn how marine debris causes problems for wildlife, their habitats, and people.

TRASH TALK: How Does Marine Debris Impact the Ocean, Animals, and Me?