Marine debris is a worldwide issue that affects everyone, no matter where they live. It comes from people and can enter our waterways, ocean, and Great Lakes in many ways from activities on land and at sea. Marine debris is identified as land-based, ocean-based, or disaster debris, depending on its source. Land-based marine debris comes from human activities that take place on land, while ocean-based marine debris comes from trash, fishing gear, and other items lost off of vessels or platforms at sea. When a storm, natural disaster, or accident at sea creates large amounts of marine debris, this is called disaster debris, and can include abandoned vessels or pieces of buildings.

Our trash travels. Whether it is properly thrown away or dumped on purpose, it can find its way into our ocean and Great Lakes. This could happen at the beach, while boating on the water, or even many miles inland where trash can be blown and swept into waterways. Wherever trash comes from, it can eventually make its way into the ocean and Great Lakes and cause a lot of problems.

You can make a difference too! Learn how you can help take on marine debris, no matter where you are!

How much marine debris is in the ocean and Great Lakes?

Marine debris is a large and global problem, and it can be very difficult to say how much enters the ocean and Great Lakes. Once marine debris is in the ocean, it can be challenging to understand where it came from, where it goes, or how much is there.

A study by Borrelle et al. estimated that in 2016, as much as 23 million metric tons of plastic waste entered the ocean and waterways around the world. This number may feel huge, but it’s not the whole picture. It doesn’t include marine debris items not made of plastic, or ocean-based marine debris, such as lost fishing gear and vessels.

If you think about an overflowing sink, the first step before cleaning up the water is to turn the faucet off. By preventing marine debris, we can turn the faucet off and keep this problem from growing! The NOAA Marine Debris Program supports projects that prevent marine debris from ever entering our ocean and waterways through outreach and education efforts that raise awareness of the issue and change behaviors related to common marine debris items.

Marine debris is everyone’s problem, and you can be part of the solution! Learn how you can help take on plastic marine debris on our How to Help page.

Who is responsible for creating marine debris?

Marine debris is a global problem, and can come from countries around the world, including the United States. Once marine debris is in the ocean or Great Lakes, it can be difficult to tell where exactly it comes from.

Managing trash is a challenging problem. The systems for managing waste can be different between cities, states, and countries, and these systems can potentially create marine debris when trash is not properly collected. It will take a coordinated global effort of many stakeholders working together to effectively address marine debris. Successful change will require participation from local and national governments, private industry, educational and research institutions, and international and regional organizations. There are many ongoing international initiatives to understand and combat the issue of marine debris. The NOAA Marine Debris Program strives to provide constructive input into these efforts.

The United States contributes to the problem, along with other countries around the world. It is important to note that while some places may generate more marine debris than others, all marine debris comes from people and often from material that is either littered or not disposed of properly. This mismanaged waste can enter the ocean via inland waterways, wastewater outflows, and transport by wind or tides. 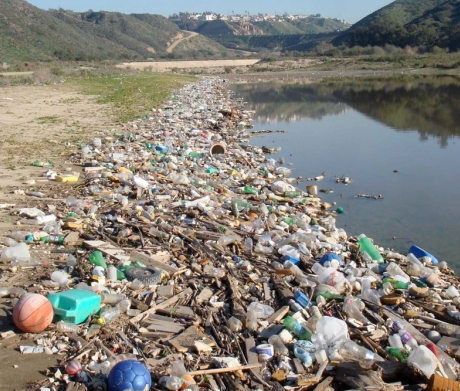 Marine debris is a global issue and can come from many different places and activities. Learn about the different sources of marine debris.

Learn about marine debris that comes from people on land.

Learn about marine debris that comes from people at sea.