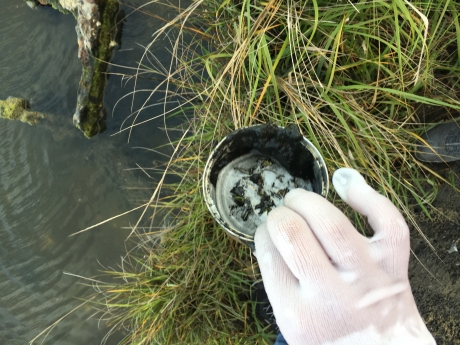 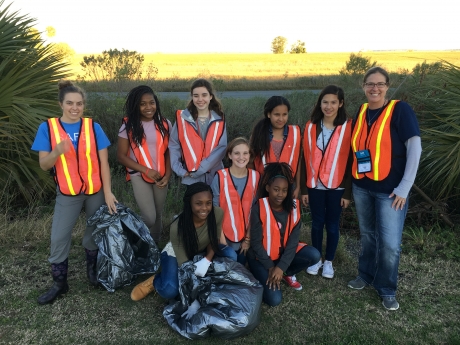 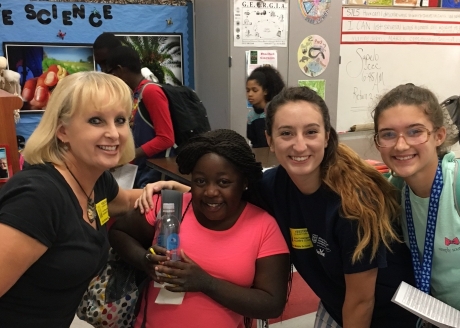 The University of Georgia Marine Extension and Georgia Sea Grant teamed up with the NOAA Marine Debris Program and teachers from Glynn Middle School in Brunswick, GA, which engaged middle school students in finding ways to reduce and prevent marine debris.

Who is involved?
UGA Marine Extension and Georgia Sea Grant, with the support of a NOAA Marine Debris Program Marine Debris Prevention through Education and Outreach Grant, worked directly with middle school students and teachers at Glynn Middle School in Brunswick, Georgia, to reduce marine debris in an impacted area of coastal marsh near the school.

What is the project and why is it important?
Glynn Middle School is located near a highly-traversed roadway in Georgia, Coastal Highway 17, which runs along several acres of sensitive marsh and tidal creek habitat. Due to high traffic volume, foam cups, food containers, plastic bags, and other land-based litter regularly accumulate along these roadways. Non-biodegradable items become lodged in the marsh grass, where they begin to break down and eventually get swept into surface waters during high tide and rain events.

To prevent this debris from impacting the marsh or washing out to sea, the school’s environmental club, Salt Marsh Soldiers, worked to remove debris and inspire other coastal citizens to get involved. They participated in monthly cleanups of a 1.2 mile stretch of the highway and adjoining areas, using the Marine Debris Tracker app to record the types and amounts of debris they collected and analyzed their data to help target solutions.

While cleanups are one solution to the global problem of marine debris, this project’s goal was to take education a step further toward innovation. Together with science teachers at Glynn Middle School and representatives from both university and community organizations, the project team visited seventh-grade classes quarterly to provide informative lectures, hands-on activities, and prompt discussions about solutions, with the aim of equipping students with critical thinking skills and increasing their capacity to engage in future problem-solving.

Project activities documented over the school year were incorporated into a short educational film and presented to students at the end of the school year. The film was premiered during the summer at a community film festival. From the movie, event attendees learned about the project’s success in removing trash from the environment and motivated them to increase their engagement and stewardship. The film is now available to reach new audiences and inspire other individuals to help prevent marine debris.

What were the project results?
Students focused on two salt marsh sites and cleaned each site a total of six times. Items collected from the marshes were entered into the Marine Debris Tracker App and results were analyzed to assess the type of marine debris that dominated the sites. The Marine Debris Tracker App results showed that 44% of the collected items were made of plastic and 35% were made of glass.

In the classroom, teachers used the NOAA Marine Debris Program’s curriculum called Talking Trash and Taking Action.  Students participated in pre- and post-tests provided in the lesson plan during their quarterly debris lesson, which also contained a hands-on activity and group discussion. A week after the last lesson concluded, teachers administered the post-test to the students. In the tests conducted after the lessons, students scored significantly higher, with more correct answers than the pre-test (both pre- and post-test questions were the same). These results demonstrated the positive impact of hands-on marine debris activities, in addition to the in-class lessons.

Throughout the project, students were photographed and filmed conducting outreach activities. The resulting film made its debut at the Green Screen Film Festival, which provided the audience a look into the positive impact a small group of students had in their community.