Watershed Approach in Erie, Pennsylvania, to Rid the Seas of Marine Debris 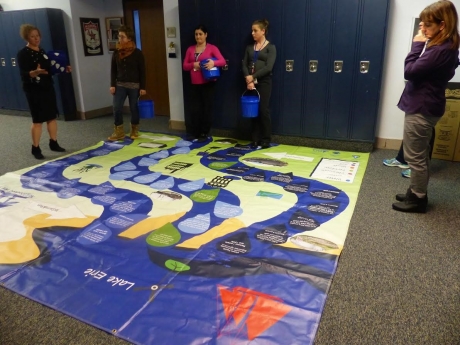 The School District of the City of Erie partnered with the NOAA Marine Debris Program and lead a district-wide education and outreach effort with students, teachers, and the community that reduced land-based marine debris by combining curriculum with stewardship.

Who is involved?
The School District of the City of Erie, PA, with the support of a NOAA Marine Debris Program Marine Debris Prevention through Education and Outreach Grant, worked with Pennsylvania Sea Grant, the Pennsylvania Coastal Resources Management Program, and Keep Pennsylvania Beautiful and provided marine debris training materials to local teachers.

What is the project and why is it important?
Marine debris, and especially consumer debris, is a big issue in the Great Lakes region. The ultimate solution to this problem is to prevent consumer items from becoming debris in the first place. The School District of the City of Erie, Pennsylvania, worked with this solution strategy and lead education and outreach efforts that reached students, teachers, and the community of Erie.

What were the project results?
Using existing teacher training materials, the school district incorporated marine debris education and stewardship activities into existing BELONG (Becoming Empowered by Living Our Natural Gifts) curriculum. Through this program, approximately 1,800 fourth and fifth graders from 12 elementary schools in the district learned what constitutes marine debris, its sources and impacts on natural habitats, and how it travels through a watershed. To relate that to their own experiences, they also discovered what type of trash is generated in their schools and neighborhoods and how it contributed to marine debris. Students then took action and developed ways to reduce the amount of trash produced and educated the surrounding communities about marine debris to change behavior in a positive way.

The fourth and fifth grade students of the City of Erie's School District, became citizen scientists and taught their building occupants, neighborhood residents, and local community about the negative impact of debris on their community. The students explained how the water cycle works and involved participants in reducing single-use plastics which would help to keep schools and neighborhoods litter free. Through the project, 2,800 students were educated on marine debris with the aid of 46 teachers that were trained from nine local elementary schools. Students also completed local cleanups which resulted in 3,571 pounds of debris removed from the environment around Erie, PA.