A Whale of a Tale: Hands-on Learning about Marine Debris Impacts on Wildlife 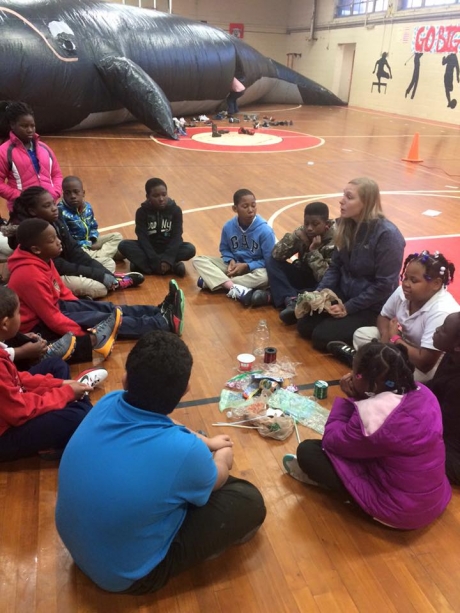 The NOAA Marine Debris Program partnered with the University of North Carolina Wilmington to educate elementary and middle school students about marine debris through hands-on lessons in an inflatable whale classroom.

Who is involved?
The University of North Carolina Wilmington (UNCW) MarineQuest, with the support of a NOAA Marine Debris Program Marine Debris Prevention through Education and Outreach Grant, educated rural students in North Carolina about the impacts of marine debris through their Traveling Through Trash (3T) program.

What is the project and why is it important?
The objective of this project was to educate youth about the origins of marine debris and the problems associated with it, particularly when encountered by migratory marine species. It aimed to encourage a change in their behavior to reduce land-based litter and prevent it from becoming marine debris. The 3T program traveled to rural communities and visited schools with its life-size inflatable right whale classroom. Students went inside the whale and participated in a simulated dissection, where examination of the organs revealed that the whale has ingested a substantial amount of marine debris. This led to discussions about the impacts of marine debris on whales and other species, such as ingestion and entanglement. Following the hands-on whale classroom experience, the students used the iRefuz app created by the 3T program to document and share the actions they took to reduce potential marine debris.

In addition to the hands-on classroom experience, the 3T program offered training and resources for teachers interested in teaching their students more about marine debris. The program provided a free marine debris professional development workshop during the 2016 summer break to help introduce teachers to marine debris and to the 3T program. They also developed marine debris educational kits covering topics such as “Ocean Gyres and Debris Collection,” “Extremes of Entanglement,” and “Biomagnification of Plastic Pieces in Marine Food Chains,” which are available for teachers to check-out as part of the technology loan program at the University of North Carolina Wilmington Center for Science, Technology, Engineering and Math.