For over a decade, the Northwest Straits Initiative, supported by NOAA, state agencies, and many others, has removed lost and abandoned fishing nets from the inland ocean waters of Puget Sound.

A problem largely invisible to most of us, these fishing nets are a legacy of extensive salmon fishing in the Puget Sound, which is now much diminished. Lost during fishing operations, the nets are now suspended in the water column or settled on the seafloor, where they snare dozens of marine species, including marine birds and mammals, and degrade the ocean habitat where they were lost. These nets are made of plastic and do not degrade significantly. They continue to catch and kill animals indiscriminately for many years. 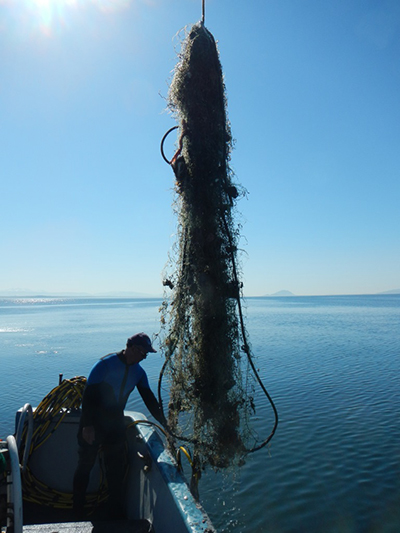 The removal of legacy nets started in 2002, after Washington State passed legislation supporting the removal and reporting of derelict nets. At the same time, Northwest Straits Initiative, in collaboration with Washington Department of Fish and Wildlife, developed the Derelict Fishing Gear Removal Guidelines, which provide operational details on how to safely remove derelict gillnets, a complex and potentially dangerous operation.

But how do you know where the derelict nets are? Where do you send the diving teams to remove them? Over the years, Northwest Straits Initiative, through its “no-fault” reporting program, received dozens of reports from fishers, divers, and the public, on the location of derelict nets. With its contractors, it also developed a state of the art side-scan sonar system and protocol to survey for and identify derelict nets.

Employing expert divers who use surface-supplied air and a two way communication system with the boat captain and biologist on deck, Northwest Straits Initiative has removed over 5,000 derelict nets from the Puget Sound so far, recording and cataloging critical features about the nets removed, including species found in the nets. Over the years Northwest Straits Initiative collaborated with Indian Tribes and the U.S. Navy and U.S. Army to remove nets from the Puget Sound. They conducted a wide variety of outreach and education efforts, including videos, media interviews, and meetings with fishermen and the general public.

To date, over 5,000 derelict nets have been removed, and at long last, the Northwest Straits Initiative is nearing the day when all shallow water nets in the Puget Sound have been removed from priority areas. While efforts to remove legacy nets are reaching a milestone, it is critical to promptly report any new net lost, and remove it quickly. To that end, Northwest Straits Initiative will continue to conduct outreach and education efforts to Puget Sound fishers and the public, to be vigilant and do their part in the on-going effort to keep the waters of the Puget Sound safe for all.

For the latest on this effort, go to this page.