What is the project?
After the massive earthquake and tsunami that devastated parts of Japan, debris that washed away arrived on Alaskan shorelines. The Sitka Sound Science Center (SSSC), with support from the NOAA Marine Debris Program, involved the Sitka community in removing that debris from shorelines in Southeast Alaska and raising awareness of the overall marine debris issue.

Who is involved?
The removal efforts were coordinated by the Sitka Sound Science Center, as part of the NOAA Restoration Center and MDP’s Community-based Marine Debris Removal Grant program. Students from Pacific High School collected debris from Biorka Island, and a crew aboard the fishing vessel Cherokee aided with removal along rugged wilderness shoreline in the Tongass National Forest.

What does it accomplish?
This multi-year project was centered on tsunami debris removal, but also aimed to foster collaboration among the different communities in Sitka and promote marine debris awareness in the area’s youth. In September 2013, a group of students from Pacific High, a school serving rural and native youth, spent their orientation week with the SSSC’s marine debris coordinator, learning about marine debris, the tsunami in Japan, and cleaning up debris from Biorka Island. During the school year, their teachers used results from that cleanup to incorporate marine debris and its impacts in science, math, culture, and social studies classes. SSSC continued this effort in the 2014-2015 school year, allowing students to share their project results at the Alaska Marine Science Symposium. In the summer of 2014, Sitka Native Education Program students attended “Camp Coastal Cleanup” for a week, spending a full day removing tsunami debris from Tongass Forest beaches and learning about pollution, plastics, natural resources, and oceanography. Their goal was to create an educational exhibit for display at the SSSC visitor’s center, which hosts 10,000 visitors and 1,300 students each year. In a parallel effort, SSSC employed an experienced crew aboard the F/V Cherokee to remove up to 20 metric tons of tsunami debris and derelict fishing gear from coastal habitat in the Southern Baranof Wilderness areas. The crew spent three days in the fall of 2013 removing debris, including plastic foam debris, from beaches. This work continued into the 2014 field season, with a focus on the West Chichagof-Yakobi Wilderness area.

What is something unique about the project?
The students at Pacific High School created art from the debris they found on Biorka Island, including a mosaic and forget-me-not sculptures. 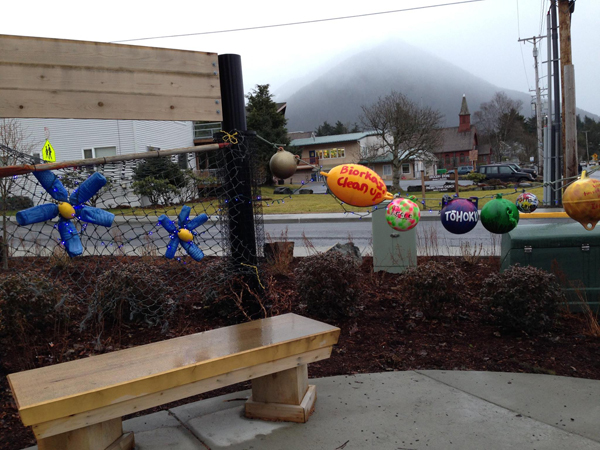