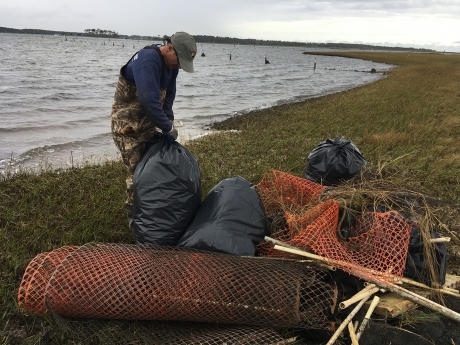 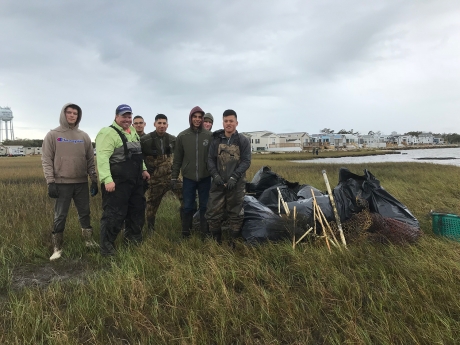 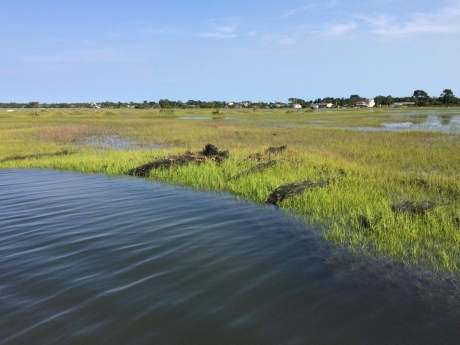 Aquaculture gear is visible on the shore of a marsh near Harkers Island, NC. (Photo Credit: Ken Riley, NOAA) 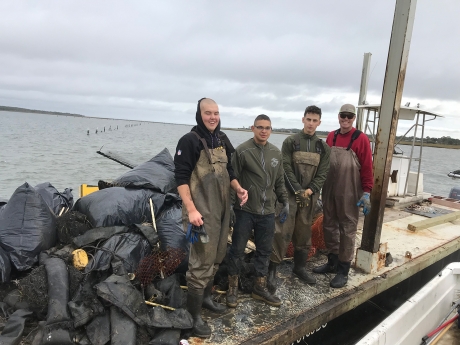 The North Carolina Coastal Federation teamed up with the NOAA Marine Debris Program and removed derelict aquaculture fishing gear from approximately 30 acres of oyster reef, submerged aquatic vegetation, and coastal wetlands adjacent to Harkers Island, NC. They worked with shellfish growers and other interested stakeholders and developed best management practices for disposal and prevention of marine debris that could be generated by aquaculture operations.

What is the project and why is it important?
Shellfish aquaculture has become one of the fastest-growing U.S. industries in the coastal zone. The development of aquaculture is a national priority in order to meet growing seafood demands, address U.S. food insecurity, and revitalize water-dependent coastal economies. However, with this booming industry, derelict aquaculture gear and debris is an increasing concern. Gear can be lost during coastal storms, as a result of material defects, due to improper farming, or from site abandonment. The debris left behind can lead to wildlife injuries, degrade sensitive marine habitats, create safety and navigation hazards, and cause unsightly litter along shorelines.

What were the project results?
The North Carolina Coastal Federation worked with marine contractors to remove derelict aquaculture gear from 30 acres of coastal waters (oyster reefs, submerged aquatic vegetation, and coastal wetlands) off Harkers Island, North Carolina. Their efforts resulted in the removal of 590,000 pounds of debris. Additionally, almost 180 volunteers removed about 8,000 pounds of debris from shorelines around Carteret County. Duke University Marine Lab assisted and used unmanned aerial systems which mapped the impacted area before and after removal operations, and monitored the recovery of marsh, seagrass, and oyster habitats.

Additionally, while removal of this debris is important, the North Carolina Coastal Federation also worked with aquaculture growers to prevent debris issues in the future by developing and disseminating Shellfish Mariculture Best Management Practices (BPM) for the prevention of marine debris from the shellfish mariculture industry. These Best Management Practices focused on prevention, removal, and disposal of aquaculture marine debris and were shared with all current leaseholders in North Carolina. The Best Management Practices also provide a guide for new growers and lease applicants to follow to make their best effort in keeping gear on the farm during normal operations, as well as in preparation for a storm.  A presentation on marine debris and shellfish aquaculture was also developed and used during an annual required training class for new aquaculture leaseholders conducted by North Carolina Sea Grant.

Aquaculture gear is visible on the shore of a marsh near Harkers Island, NC. (Photo Credit: Ken Riley, NOAA)