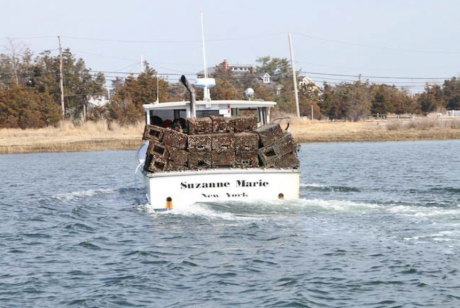 What is the project and why is it important?
Derelict lobster traps can continue to fish after they have been lost and can impact the valuable and already-threatened LIS lobster population. The CLIS, and particularly the area targeted for removal, has historically been an area of significant trap deployment by both New York and Connecticut commercial lobstermen. Because of the logistics of distance, time, and effort, lobster traps in the CLIS also tend to be abandoned more frequently than other areas. Current survey data shows that these waters also have high concentrations of species of concern including American lobsters, black sea bass, and tautog. This project’s trap removal efforts is worked to mitigate both target and bycatch species trap mortality.

This project is removed, as well as quantified the extent and distribution of, derelict lobster gear in New York and Connecticut waters of the LIS. It builds upon other highly-successful projects that were funded by The Fishing for Energy/National Fish and Wildlife Foundation, Long Island Sound Futures Fund/National Fish and Wildlife Foundation, and past NOAA funding. This project marked the first trap removal program encompassing the entire LIS while opening participation to commercial lobstermen that possess current New York and Connecticut licenses. During removal, a specialized long-line grapple system was used to retrieve derelict lobster traps. For every retrieved trap, species were examined, removed, and recorded and gear condition is assessed. All derelict lobster gear was returned to recycling containers at shore-side sites in the ports of Mt. Sinai and Mattituck on Long Island.