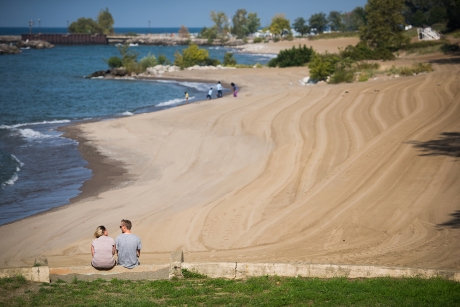 Cleveland Metroparks has teamed up with the NOAA Marine Debris Program to remove over 6,000 tons of concrete and other construction material from Euclid Beach Park, conduct small-scale marine debris removal, and install an educational display on the detrimental effects of marine debris in Lake Erie.

Who is involved?
With the support of a NOAA Marine Debris Program Community-Based Removal Grant, the Cleveland Metropolitan Park District worked to remove debris from Euclid Beach Park in Cleveland, Ohio. The project team also included The Alliance for the Great Lakes, who lead several volunteer cleanups.

What is the project and why is it important?
The accumulation of marine debris is harmful to wildlife that utilize the shoreline and nearshore areas of Euclid Beach Park. Nearshore areas are important spawning areas for fish species, including largemouth bass, bluegill sunfish, and white crappie. Euclid Beach Park was previously home to an amusement park that was demolished decades ago. The remnants of that park have altered the shoreline of Lake Erie and as part of this project, the Park District is removing 6,250 tons of the remnant debris, such as concrete slabs and metal.

As part of this project, debris removal from the shoreline and nearshore areas of Euclid Beach restored important fish spawning habitats as well as recreational-use areas. Land-based debris, which also has the potential to impact habitats, was addressed as well with volunteer cleanup events and the installation of signage aimed at educating park visitors as to the impacts of marine debris.