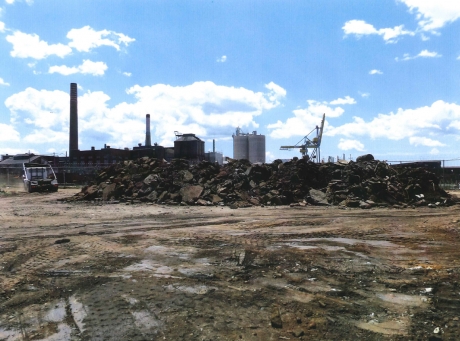 Who is involved?
The Camden County Municipal Utilities Authority in New Jersey, supported by a NOAA Marine Debris Program (MDP) Community-based Marine Debris Removal grant, removed large debris from the Delaware River shoreline in the City of Camden, New Jersey. Camden County also partnered with the Camden Adventure Aquarium for volunteer cleanups of smaller-scale debris at the site and the Partnership for the Delaware Estuary to educate the public on the benefits of creating a living shoreline in their community.

What is the project and why is it important?
The City of Camden made enormous strides to address environmental issues related to reducing combined sewer overflows, reclaiming vacant land for parks and stormwater management, and building community capacity to better manage natural systems. As part of the City’s efforts, Camden County and other partners are removed marine debris as part of the establishment of a living shoreline along Phoenix Park and the waterfront of the adjacent Camden County Municipal Utilities Authority-owned and operated wastewater treatment facility. This removal was key for restoring living shoreline, wildlife habitat for several species of concern, and usability of the shoreline for the residents of Camden.

This urban living shoreline project in tidal freshwater was the first of its kind in New Jersey. The chosen site was of particular importance as the aquatic habitat being restored is home to two local species of concern-- the shortnose sturgeon and the tidewater mucket, a freshwater mussel. The importance of the project, such as providing access to water and natural aquatic habitat to the community, was highlighted in public education programs through the Partnership for the Delaware Estuary.