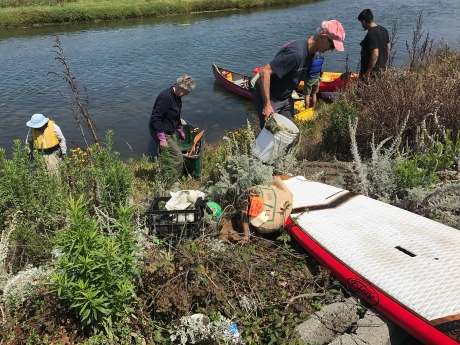 Save Our Shores volunteers clean up the shores of the Pajaro River in August 2017. (Photo Credit: Save Our Shores)
Click photo for more details

Save Our Shores teamed up with the NOAA Marine Debris Program and removed large debris items from difficult-to-access areas of three major watersheds that feed into Monterey Bay National Marine Sanctuary.

Who is involved?
Save Our Shores, with the support of a NOAA Marine Debris Program Community-based Marine Debris Removal grant, removed at least seven tons of debris from watersheds that feed into Central California’s Monterey Bay National Marine Sanctuary.

What is the project and why is it important?
The Pajaro River, Elkhorn Slough, and Salinas River all feed into the Monterey Bay National Marine Sanctuary, and are home to countless protected species and habitats. These three watersheds unfortunately also consistently rank among the top ten Sanctuary hotspots for trash and marine debris. These areas are affected by illegal dumping of household goods, furniture, appliances, and agricultural waste left behind by local migrant communities that lack sufficient waste disposal options.

What were the project results?
Over the course of 19 cleanup events, Save Our Shores worked with nearly 300 public participants, trained volunteers, and other partners to remove over 5,000 pounds of trash and over 200 pounds of recycling. The cleanups covered 40 miles of land and water adjacent to the Monterey Bay National Marine Sanctuary. Paddleboard and kayak-based waterway cleanups allowed volunteers to access back reaches and narrow inlets, and shore-based cleanups on protected lands targeted areas where illegal dumping is common. Save Our Shores also conducted outreach to local schools, sharing project results at community events, and engaged agricultural companies and their employees to develop solutions to this debris issue.

All cleanups removed large amounts of plastic items, but each cleanup had its own unique debris profile. Some cleanups resulted in a record number of plastic bottles, while others revealed high numbers of household appliances. Other cleanups recovered glass bottles and to-go containers assumed to be left by visitors to the area. At the end of the project, Save Our Shores was able to engage and educate a new population of public volunteers and inspire them to be better stewards of the marine community.