Moving Toward a Litter-free Mardi Gras in Alabama 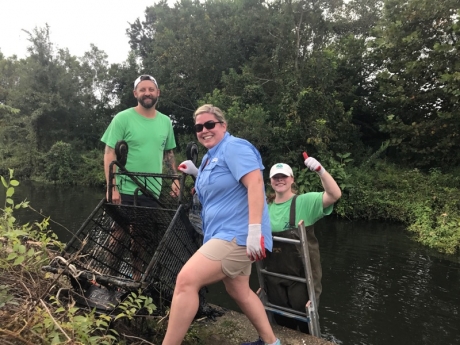 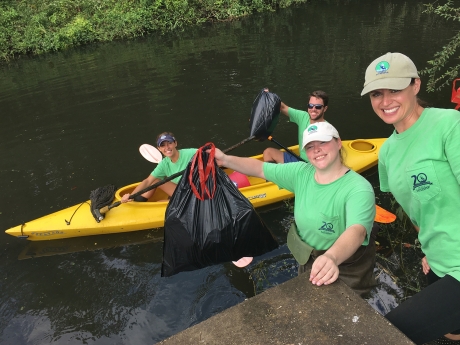 The Mobile Baykeeper teamed up with the NOAA Marine Debris Program to help the City of Mobile “Move Toward a Litter-Free Mardi Gras” by organizing a series of large-scale debris removals on One Mile Creek, implementing an extensive media campaign to raise public awareness, and purchasing temporary litter barriers and concrete inlet screens to cover storm drains along parade routes.

Who is involved?
The Mobile Baykeeper (Baykeeper), with support from a NOAA Marine Debris Program Community-based Marine Debris Removal grant, lead efforts to increase the health of One Mile Creek, which leads to Mobile Bay in Alabama and eventually into the Gulf of Mexico. The Baykeeper partnered with the Mobile Bay National Estuary Program and Thompson Engineering on large-scale debris removal activities, and with the City of Mobile for targeted debris reduction during the City’s Mardi Gras celebrations in 2018 and 2019.

What is the project and why is it important?
Mardi Gras is a time for celebration in Mobile, Alabama. However, this two and half week celebration is a significant contributor to debris accumulation in One Mile Creek, as revelers follow the tradition of throwing beads, snacks, and other items into the gathered crowds. This litter ultimately finds its way into storm drains and into the Creek where it is then flushed out into Mobile Bay.

Mobile Baykeeper conducted an initial assessment of litter in One Mile Creek to establish a baseline of debris prior to removal and prevention efforts. Following the assessment, the Baykeeper hosted six extensive community cleanups to remove existing small debris in the Creek, and addressed medium to large-sized debris along the Creek sides and bottom with the help of Thompson Engineering.

To prevent more debris from entering the Creek during Mardi Gras celebrations in 2018 and 2019, the Baykeeper partnered with the City of Mobile to install temporary storm drain covers and concrete inlet screens along the Mardi Gras parade route. In addition, they launched a targeted media campaign to highlight the impacts of Mardi Gras debris and increase awareness in the community of how behavior during the celebration can lead to debris accumulation. As a final step to assess the effectiveness of these efforts, the Baykeeper monitored the Creek after Mardi Gras and shared the results publicly.