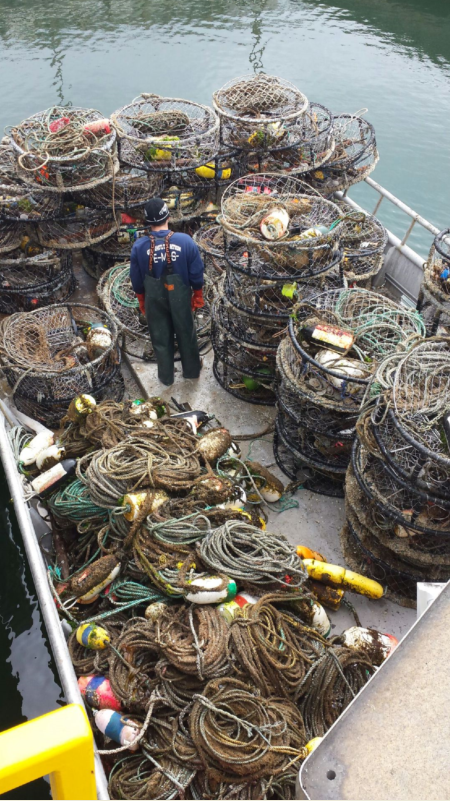 Some of the derelict crab pots and lines recovered by the project. (Photo Credit: The Nature Conservancy)
Click photo for more details

The Nature Conservancy, the Quinault Indian Nation, and the NOAA Marine Debris Program partnered to remove derelict crab pots from tribal waters off the Washington Coast and to develop a sustainable reporting and annual recovery program for lost pots.

Who is involved?
The Nature Conservancy and the Quinault Indian Nation teamed up to remove derelict crab pots from 155 square miles along the Washington Coast with the support of a NOAA Marine Debris Program Community-based Marine Debris Removal Grant. The project also partnered with the Grays Harbor Marine Resources Committee on education and outreach efforts at public events and meetings.

What is the project and why is it important?
The project area encompassed 155 square miles of the outer Washington coast, which includes the Quinault Indian Nation Special Management Area, the Olympic Coast National Marine Sanctuary, the Grays Harbor National Wildlife Refuge, and the Copalis National Wildlife Refuge. This area is a highly productive upwelling zone, which draws diverse sea life including marine mammals and seabirds. These waters are also home to commercially and recreationally important species including Dungeness crabs, salmon, halibut, and other ground fish. The Dungeness crab fishery in this area is one of the most economically important fisheries in Washington, with an average annual harvest of more than 14 million pounds for the past 20 years.

A side-effect of this booming Dungeness crab fishery is gear loss and the subsequent bycatch of sea life, also known as “ghost fishing.” In Washington State, an estimated 120,000 tribal and non-tribal crab pots are deployed annually, with an approximate loss rate of up to 10% each year. Although Washington has regulations that require the design and construction of crab pots to include escape rings which minimize ghost fishing, lost crab pots are still responsible for unnecessary crab mortality, damage to habitats, and entanglement and mortality of marine mammals and other important species. Derelict crab pots have also become navigational hazards in the area, as their floats and lines get snagged on passing vessels.

For this project, The Nature Conservancy and the Quinault Indian Nation surveyed for and removed an estimated 1,050 crab pots from the project area over the course of three seasons, when the crab fisheries are closed. The Quinault Department of Fisheries also developed a reporting and recovery program in consultation with The Nature Conservancy and the tribal fishing community. The program was modelled upon a previously-developed crab pot recovery program implemented by the Washington Department of Fish and Wildlife, but was adjusted to fit the cultural and community norms of the Quinault Indian Nation. The project also conducted education and outreach about these removal efforts, the recovery program, and how fishermen can report lost pots. The Nature Conservancy and the Quinault Indian Nation also partnered with the Grays Harbor Marine Resources Committee to amplify the reach of these messages.

Some of the derelict crab pots and lines recovered by the project. (Photo Credit: The Nature Conservancy)