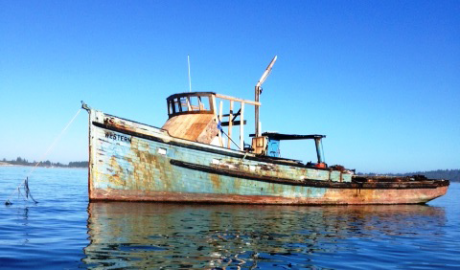 An older image of the F/V Western before it sank. (Photo Credit: Oregon State Marine Board)
Click photo for more details

The Oregon State Marine Board teamed up with the NOAA Marine Debris Program which removed the F/V Western, a sunken vessel in Coos Bay, Oregon. They also performed an underwater monitoring at the removal area, that created an inventory of commercial abandoned and derelict vessels (ADVs) in Oregon. This project also initiated an ADV Task Force to help prevent future ADVs in Oregon.

Who is involved?
The Oregon State Marine Board, in collaboration with the Oregon Department of State Lands and with the support of a NOAA Marine Debris Program Community-based Marine Debris Removal Grant, removed a sunken vessel near Coos Bay, Oregon. Billeter Marine, a marine salvage contractor, was hired to conduct the removal. In addition, the Oregon Department of Fish and Wildlife conducted a year-long underwater monitoring effort which assessed environmental recovery of the removal site. An ADV Task Force was also developed, with Oregon Sea Grant who assisted with the coordination and facilitation of the Task Force public meetings.

What is the project and why is it important?
The Oregon State Marine Board removed the F/V Western, an 80-ton, wood-hulled fishing vessel that was built in 1934 and sank in January 2015 near the Empire Dock in Coos Bay, Oregon. Removing the sunken vessel, which is near a busy shipping channel and in an environmentally-sensitive location, will prevent further harm to the environment and allow it to recover. To monitor the environmental recovery of the wreck area after the vessel has been removed, the Oregon Department of Fish and Wildlife used an underwater camera suspended from a boat and conducted bi-monthly surveys over the course of one year. The underwater images provided important information on how the channel floor, damaged by the sunken vessel, recovered over time.

Abandoned and derelict vessels (ADVs), such as the F/V Western, are a problem along the entire Oregon coast. To facilitate the prevention of ADVs in Oregon, this project initiated an ADV Task Force. The Task Force brought together partners, such as port and marina managers, vessel owners, and fishermen, and identified strategies for preventing commercial fishing vessels from becoming marine debris. The ADV Task Force drafted a report that included the group’s process, challenges, options for prevention, and recommendations. In addition, this project is also developed an inventory of commercial fishing vessels along the Oregon coast that needed to be removed. Using a matrix developed by the Columbia River Derelict Vessel Task Force, the inventory included vessel location, ownership information, history, and condition to facilitate ADV removal in Oregon.

An older image of the F/V Western before it sank. (Photo Credit: Oregon State Marine Board)