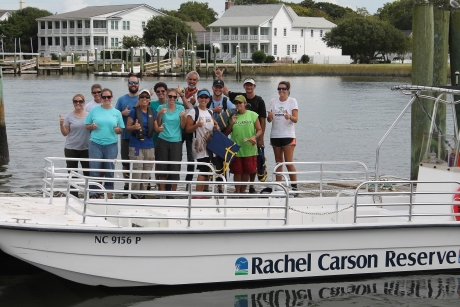 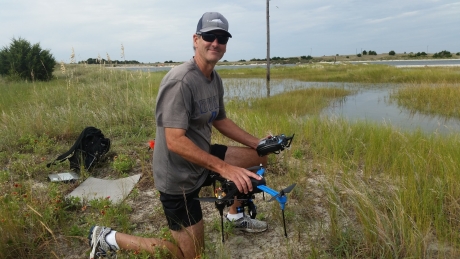 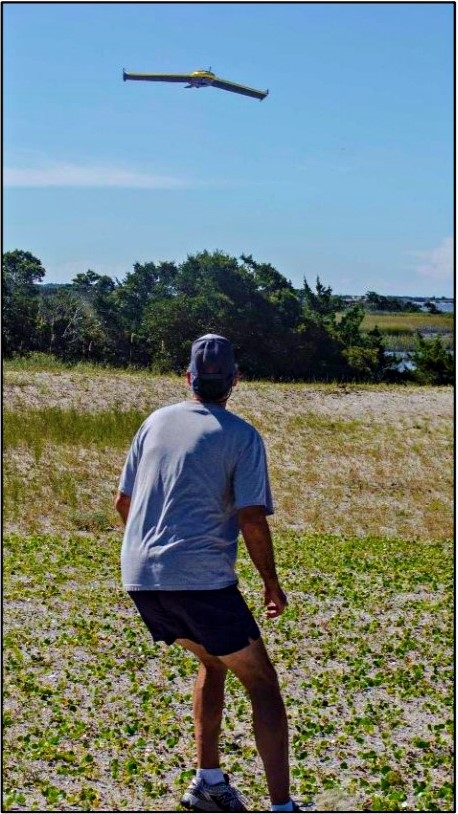 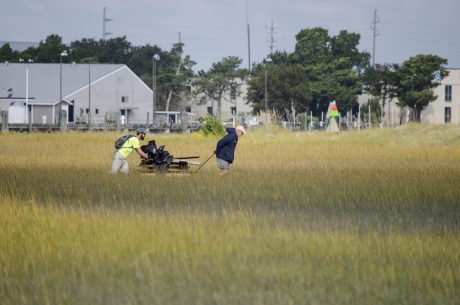 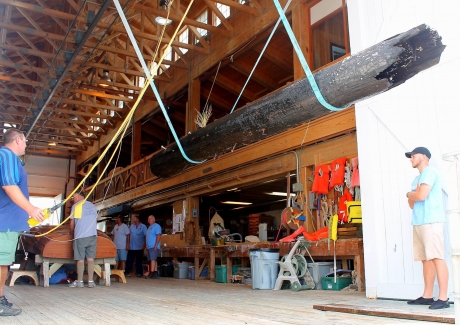 The North Carolina Maritime Museum assisted with lifting large debris items and loading them onto a City of Beaufort truck, where the debris will then be taken and disposed of. (Photo Credit: Rachel Carson Reserve)
Click photo for more details

The North Carolina National Estuarine Research Reserve partnered with the NOAA Marine Debris Program and researchers from Duke University which used unmanned aerial systems (UAS) to map and identify marine debris within the Rachel Carson Reserve, and used this data to locate and remove debris as well as monitor restoration of debris-damaged areas.

Who is involved?
With the support of a NOAA Marine Debris Program Community-based Marine Debris Removal Grant, the Rachel Carson Reserve (RCR), part of the North Carolina National Estuarine Research Reserve (NCNERR) within the State of North Carolina Division of Coastal Management, teamed up with Duke University’s Marine Robotics and Remote Sensing Lab which prioritized cleanup efforts within the reserve. Duke University flew unmanned aerial systems (UAS) over the entirety of the reserve and produced maps that identify the location of medium and large debris items. The RCR also partnered with the Town of Beaufort, North Carolina Maritime Museum - Beaufort, and TowBoatUS and assisted with the removal and disposal of debris. North Carolina Sea Grant also worked with reserve staff to disseminate information about the project in Coastal Watch magazine.

What is the project and why is it important?
Marine debris, such as lumber, pilings, pallets, derelict fishing gear, and abandoned and derelict vessels, washed onto the shoreline and beyond in the RCR. If these items were not removed, they may degrade habitat or injure wildlife or visitors to the reserve. In the past, RCR staff have actively managed debris issues through formal and non-formal education programs, research, and organized cleanups. The majority of these cleanups have focused on smaller debris items that community volunteers can easily and safely handle. However, the medium and larger debris items are often more difficult to remove, requiring a much more coordinated cleanup effort. Another challenge is that much of the RCR is remote and requires boat or ferry access, making debris removal difficult.

To address these issues, the RCR teamed up with Duke University’s Marine Robotics and Remote Sensing Lab to produce maps created by flying UAS over the entirety of the reserve. These UAS produced geo-referenced, high-quality maps that allowed for Duke to identify medium and large debris in areas that are remote or not often accessed by reserve staff. The maps were then compared to already-established habitat maps of the RCR, and then used to strategically prioritize removal efforts to maximize habitat benefits. Debris and debris scars can also be measured from the UAS-generated maps and used to monitor habitat regeneration. The project team estimated that over 12,000 pounds of debris will be removed by the end of this 2-year project!

The North Carolina Maritime Museum assisted with lifting large debris items and loading them onto a City of Beaufort truck, where the debris will then be taken and disposed of. (Photo Credit: Rachel Carson Reserve)