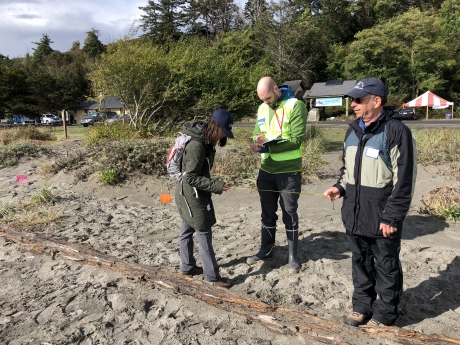 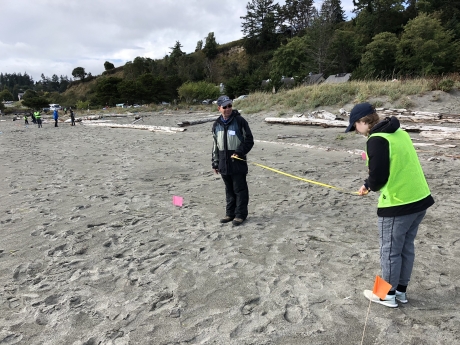 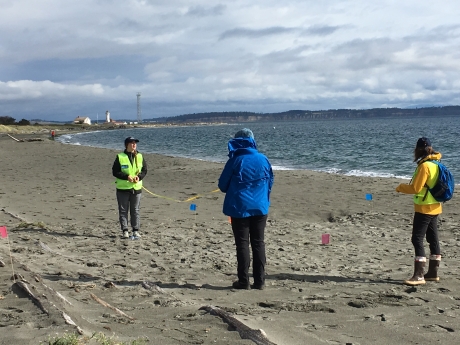 A volunteer and COASST staff measure the distance between the volunteer and a marine debris item spotted (Photo: NOAA).
Click photo for more details

Who is involved?
The University of Washington’s Coastal Observation and Seabird Survey Team (COASST), is collaborating with the MDP to evaluate and identify ways to correct for observer bias in estimating debris densities using the MDMAP shoreline monitoring protocol. Field trials will be conducted on a handful of beaches across Washington State. Funding for this project came from the NOAA Marine Debris Program through a NOAA Cooperative Institute with the Joint Institute for the Study of the Atmosphere and Ocean (JISAO).

What is the project and why is it important?
Marine debris items are frequently found along coastlines. The Marine Debris Monitoring and Assessment Project (MDMAP) is a citizen science initiative that engages both domestic and international volunteers in conducting standardized shoreline surveys for marine debris items larger than 2.5 cm. These monitoring surveys help us answer fundamental questions about the types and distribution of debris on shorelines, such as where debris originates, what beaches accumulate the most debris, how debris patterns change over time, and if preventative measures lead to debris reductions. In 2015, we collaborated with the Ocean Conservancy and the Commonwealth Scientific and Industrial Research Organisation (CSIRO) to conduct an assessment of both the MDMAP and International Coastal Cleanup Datasets, which shed some light on geographic patterns and trends in marine debris distribution in the US. This study also highlighted that MDMAP data could be more robust if the way in which observers (volunteers) conduct the monitoring surveys was more streamlined.

In this current study, COASST will conduct field trials using various iterations of current monitoring protocols to evaluate the NOAA Marine Debris Monitoring and Assessment Project’s standing stock shoreline monitoring survey method. This project will identify how observer bias, such as the number of observers and their sampling behavior, can contribute to differing survey results. Observers (volunteers) will participate in monitoring events, in which one, two or three volunteers will monitor for a known, and fixed amount of marine debris in a 5-meter transect following several walking patterns. Upon completion of the field trials, COASST will analyze the recorded data and compare the results with the known amounts and types of debris that were in each transect. Results are intended to inform refinements to protocols from both programs, with the ultimate goal of generating more robust datasets.

For more information on the Marine Debris Monitoring and Assessment Project (MDMAP), see the MDMAP Get Started Toolbox.