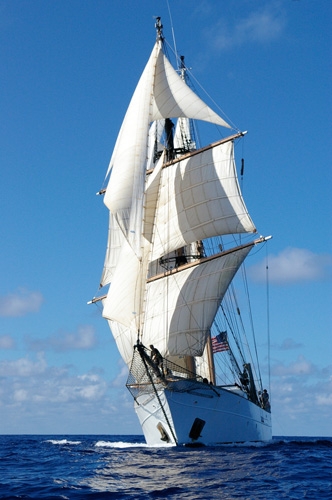 What’s the project?
The presence of microplastics (particles smaller than 5 mm in size) in the world’s ocean is well documented. Plastic marine debris is known to contain a variety of chemicals added during manufacturing or absorbed from seawater. Additionally, there are documented cases of ingestion by a wide range of marine animals that result in risk to individual marine organisms with potential impacts throughout the food web. With funding and support from a NOAA Marine Debris Program research grant, Sea Education Association, Inc. aimed to explore and answer questions about the risk plastics and the toxic chemicals that often accompany them might have on a copepod (microscopic plankton that are a food source for many fish and filter feeding marine organisms).

What does it accomplish?
SEA studied the interaction between Low-density polyethylene (LDPE), a commonly encountered microplastic material, and PBT chemicals to answer fundamental questions about the interaction of persistent, bio-accumulative, and toxic substances with marine zooplankton. Their primary study question was: Will copepods demonstrate selective grazing behavior when presented with microplastics contaminated with select PBT chemicals, in addition to their natural prey? Essentially these scientists were interested in observing copepod grazing behaviors to answer two questions: 1) do copepods have the ability to distinguish between microplastic debris and natural prey and 2) can copepods distinguish between microplastics with PBT contaminants versus microplastics without contaminants.

What’s something unique about the project?
Student interns assisted with the copepod grazing experiments, as well as focused on marine biodiversity and conservation, marine debris sampling, collection, and preservation led by Dr. Siuda. Additionally, SEA continued active outreach to public and scientific communities by presenting at industry events, educating college students, and participating in plastics related panels. Microplastic samples were collected onboard the SSV Corwith Cramer tall ship (above). SEA scientists and students collected plastic samples on their oceanographic research vessels in the Atlantic Ocean since 1986.