Quantifying the Effects of Derelict Fishing Gear in the Maryland Portion of Chesapeake Bay.pdf 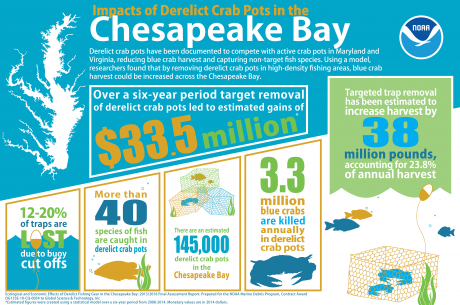 What’s the project?
With funding and support from the NOAA Marine Debris Program, Global Science & Technology, Inc. (GST) was contracted to investigate the physical, biological, and socio-economic impacts of Derelict Fishing Gear (DFG) in the Chesapeake Bay. A Regional Impact Assessment of DFG in the Chesapeake Bay can help inform management decisions addressing the ecological and economic effects of DFG in the Chesapeake Bay. The resulting work also provides a sound foundation of modeling, assessment and management techniques to reduce DFG in other large closed coastal systems and bays around the United States.

Who is involved?
Along with GST and the NOAA Marine Debris Program, this project included the Virginia Institute of Marine Science (VIMS) College of William & Mary, Versar, Inc., and CSS-Dynamac who brought unique skillsets from leading coastal ecologists, spatial data modelers, economists and natural resource scientists, to meet the research expectations of the NOAA MDP.

What does it accomplish?
This project compiled and reviewed DFG data that was gathered over the past decade, conducted a comprehensive analysis of those data and developed a framework to guide others who may perform similar impact assessments in other large coastal systems. It also described both ecological and economic impacts in the Chesapeake Bay, including estimates of: 1) incidental mortality rates of species trapped and killed in DFG; 2) lost ecosystem services (e.g., supporting, regulating, provisioning, and cultural services); 3) lost ecosystem services provided by natural habitat that is damaged by DFG; and 4) economic losses imposed by DFG on natural resources in Chesapeake Bay.

What’s something unique about the project?
This study was one of the first comprehensive, bay-wide assessments of derelict fishing gear and included analysis of impacts on both the Maryland and Virginia portions of the Chesapeake Bay. It also included a significant emphasis on the economic impacts of DFG on the Bay and included the development of a framework document that can be applied to other regions of the country with similar problems. A scientific paper outlining the economic impacts of DFG on Virginia fisheries was published by VIMS scientists on January 21, 2016. Check out the paper here. In addition, from 2006-2009, Versar, Inc., one of the partners on this research project, assisted the NOAA Chesapeake Bay Office and MDP to survey and describe derelict crab trap density in the Chesapeake Bay. Survey results indicated that derelict crab traps appear to be ubiquitous throughout areas where the commercial hard crab trap fishery is active in the Maryland portion of the Chesapeake Bay. Over the course of that project, trap monitoring revealed that both blue crab and other bycatch species continue to be captured and killed after bait from the trap is gone. Taken together, the results of this assessment indicated that ghost fishing by derelict traps is widespread and is a measurable source of unaccounted fishing mortality for blue crab and can negatively affect bycatch in the Maryland portion of Chesapeake Bay. Continuing down this path of research and assessment, the findings and resulting model are an excellent tool for future impact assessments and are highly adaptable in assessing impacts in different geographical areas.

Results
This study found that derelict crab pots in both Maryland and Virginia compete with active crab pots, killing approximately 3.3 million blue crabs annually, and capturing more than 40 non-target fish species. Using a model over a six-year period from 2008-2014, the researchers found that targeted removal of derelict crab pots in high-density fishing areas led to an estimated increase in harvest of 38 million pounds across the Chesapeake Bay. This 23.8% increase resulted in estimated gains of $33.5 million. Over the six year period, $4.18 million were spent to remove 34,408 derelict pots, resulting in increased gear efficiency for the active commercial fishery and an additional 29.8 million pounds in harvest valued at $21.3 million. This figure includes the payment to the participants and the purchase of the equipment (side scan units) they used to locate the derelict gear. It does not include funding to collect, coordinate, and analyze the data.

For more information on this project and its results, check out this blog post.

*Estimated figures were created using a statistical model over a six-year period from 2008-2014. Monetary values are in 2014 dollars.