Understanding the Movement of Marine Debris in the Delaware Bay 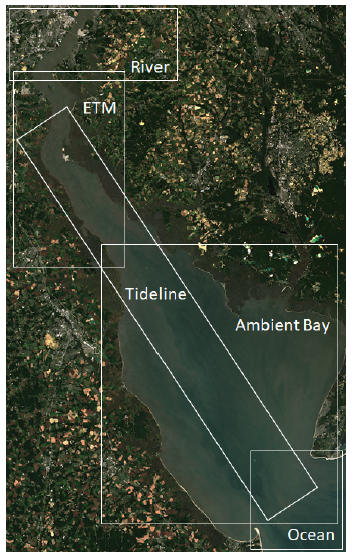 Satellite image of the Delaware Bay with areas highlighted where data is collected from for the project (Credit: University of Delaware).
Click photo for more details

The University of Delaware is investigating how marine debris enters and moves through the Delaware River and Bay and where it ends up.

Who is involved?
Researchers from the University of Delaware, with support from a NOAA Marine Debris Program research grant, are investigating the factors that influence the movement of debris that enters the Delaware River and is transported through the Delaware Bay to coastal waters. The research team will use data collected from the river and bay to build models that allow researchers to evaluate and predict where marine debris ultimately ends up in this estuary.

What is the project and why is it important?
We know that rivers can transport marine debris from upstream sources all the way to coastal and oceanic waters. However the actual movement of marine debris in riverine systems is not well understood. Researchers are working to answer questions, such as: what are the patterns of debris movement in rivers and bays? What are the sources of debris along the river and where does it end up? What physical factors influence the movement of debris, such as waves, tides, or currents?

In this study, researchers from the University of Delaware are evaluating scenarios that attempt to explain how marine debris moves from upstream rivers to downstream coastal waters. They will identify the amount, size, and type of marine debris collected from targeted areas of the river, estuary, and bay. The researchers will also use satellite imagery to identify specific areas in the Delaware Bay with strong surface flows, called tidelines, which they predict will collect the most debris. Data collected from each area will be used in a model to examine factors that may influence the movement of marine debris, such as waves, wind, tides, currents, fragmentation processes, turbulence, and mixing and sinking of debris (known as estuarine circulation factors). Overall, the project will allow researchers to better predict how these factors control the transport of debris, leading to improved models of marine debris in coastal waters. By identifying the areas that serve as major entry points of debris into the environment, and movement through these environments, this research will provide actionable information to support resource management.

Satellite image of the Delaware Bay with areas highlighted where data is collected from for the project (Credit: University of Delaware).