What We Know About Entanglement and Ingestion

New NOAA reports sum up the state of science on entanglement and ingestion.

The reports examine existing scientific literature to determine what we know about these impacts, as well as gaps in knowledge and how they may be addressed.


Entanglement of Marine Species in Marine Debris with an Emphasis on Species in the United States
From reports in the United States, at least 115 marine species are impacted by entanglement, including mammals, turtles, birds, fish, and crabs. Most marine debris entanglement reports involved pinnipeds, particularly northern fur seals and Hawaiian monk seals, as well as sea turtles. Worldwide, at least 200 species are impacted.

Occurrence of Health Effects of Anthropogenic Debris Ingested by Marine Organisms
An estimated 26 marine mammal species, including toothed whales, manatees, and multiple seal species, as well as all sea turtle species have been confirmed to ingest marine debris. Over one-third of sea bird species ingest plastic. Research to-date has characterized the types, sources and impacts of ingestible debris, yet the overall effects on animals remain poorly understood. 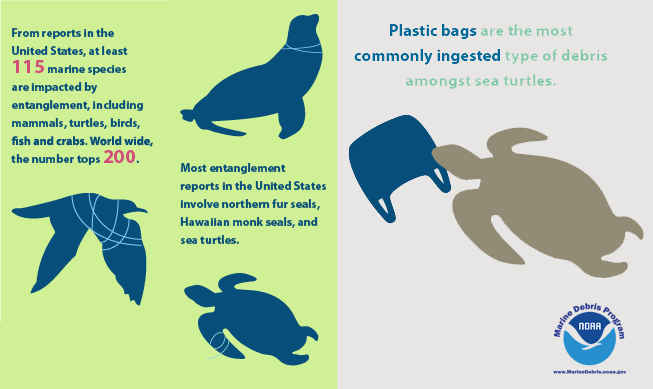