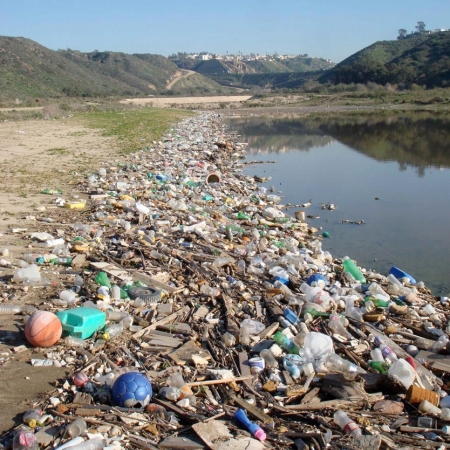 After a highly competitive review process, the NOAA Marine Debris Program is proud to announce the 10 recipients of our 2021 North America Marine Debris Prevention and Removal awards, totaling nearly $4.1 million of funding toward marine debris removal and prevention efforts in Mexico and the U.S.-Mexico and U.S.-Canada border areas. With funding provided by the United States-Mexico-Canada Agreement (USMCA) Implementation Act, the NOAA Marine Debris Program offered a competitive funding opportunity to support projects that prevent or reduce the occurrence of marine debris, and projects that remove marine debris from the environment. These awards represent the Marine Debris Program’s commitment to supporting the environmental goals of the USMCA, including the need to take action to prevent and reduce marine debris in order to preserve human health and marine and coastal ecosystems, prevent the loss of biodiversity, and mitigate the costs and impacts of marine debris.

Association of U.S. Delegates to the Gulf of Maine Council (Gulf of Maine, $367,839) will create an international collaborative approach to reduce and prevent the introduction of marine debris into the Gulf of Maine. Project activities include conducting shoreline cleanups, increasing public awareness of the issue, and tracking and documenting the presence of single-use plastic consumer debris. The project will also expand a regional database to document abandoned, lost, and derelict fishing gear, providing important data for regional fisheries managers and policy makers to use in making decisions about preventing marine debris and its impacts.

City & Borough of Yakutat (Gulf of Alaska, $371,277) will document, remove, and dispose of marine debris along the shoreline of Yakutat, located in the Gulf of Alaska. The project will increase understanding of the types and amount of marine debris impacting five target beaches, resulting in a report that characterizes the removed marine debris. This information will be used to engage local community members in learning about marine debris and ultimately enhancing efforts to prevent marine debris from entering the environment in the first place.

Instituto Tecnológico y de Estudios Superiores de Monterrey (Mexico, $250,000) will work with stakeholders to design, implement, and operate a municipal recycling program to improve waste collection and prevent plastic waste dumping and littering in the City of Monterrey, Mexico. Installing a recycling facility and building awareness of the importance of recycling will help to manage the average 25 tons of waste generated per month in the city and increase services to marginalized, low income, and at-risk populations. In addition, the project will remove debris from illegal dump sites and other priority areas, mitigating the leakage of waste into the upstream watersheds of the Rio Bravo, which flows into the Gulf of Mexico.

National Marine Sanctuary Foundation (Salish Sea, $225,115) will detect and remove medium- to large-scale marine debris, including derelict fishing gear, along Washington’s outer coast and the Strait of Juan de Fuca. The project will also organize six beach cleanup events, create a baseline understanding of marine debris in Grayland, Washington, and work collaboratively with the shellfish industry to address the issue of yellow aquaculture rope, a common debris item in the region.

Parley Foundation (Gulf of Mexico and Mexican Caribbean, $691,684) will work in six Mexican states to collect and upcycle end-of-life fishing gear, clean up nearly 100,000 pounds of debris in remote areas, and engage with undeserved fishing communities and the general public to raise awareness of marine debris and how to prevent it. The project is focused on areas with reefs and other sensitive habitats, including 11 sites listed as Wetlands of International Importance, one UNESCO World Heritage Site, and five sites designated as UNESCO Biosphere Reserves.

University of Texas at Austin (Gulf of Mexico, $401,347) will tackle the problem of plastic pellet pollution in the rivers, bays, and beaches along the Gulf of Mexico. The project will create Spanish language resources, host training sessions, and develop partnerships to expand the existing Nurdle Patrol citizen science program into Mexico. The new data will be shared widely and will contribute to collaborative research and the development of potential policy solutions by individuals, scientists, resource managers, and industry representatives.

WILDCOAST (Mexico, $175,950) will reduce the amount of marine debris entering the Tijuana River from the Los Laureles Canyon tributary in Mexico. The Los Laureles Canyon is a significant source of waste entering the Tijuana River and flowing down to the Pacific Ocean, including trash, tires, sewage, and other pollutants. The project will capture debris with a trash boom, dispose of the collected debris, and conduct outreach in Tijuana to support behavior change that reduces single-use plastic and polyethylene foam consumption in the city.