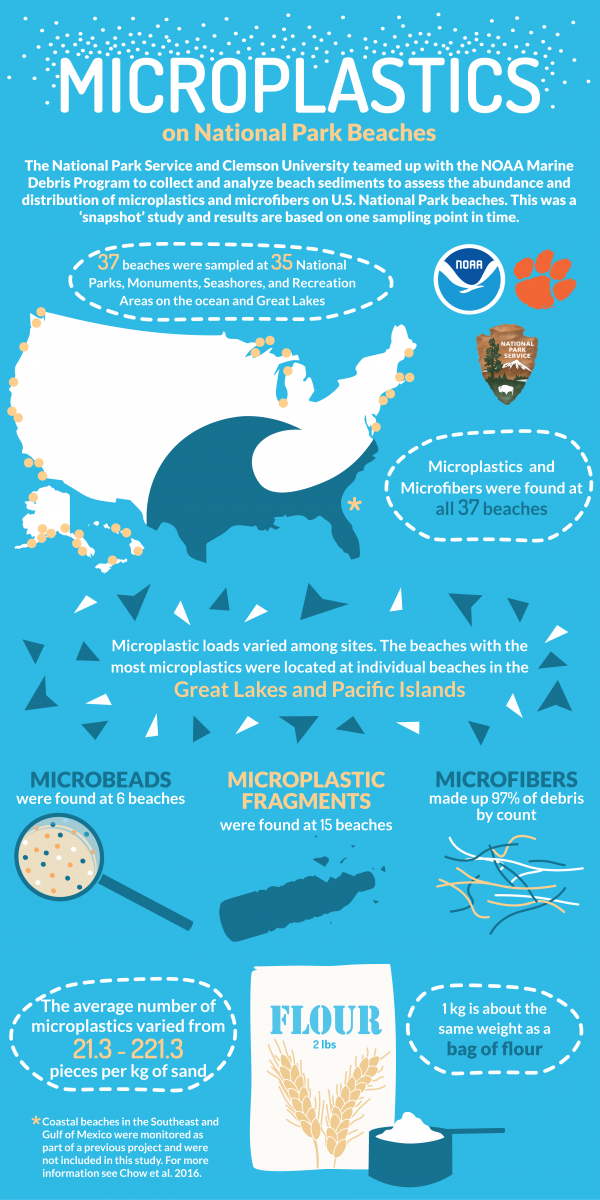 This image appears in our Photo Gallery in the following section(s):

This infographic represents results from the Quantification of Microplastics on National Park Beaches report, which was the product of a project funded by the NOAA Marine Debris Program and led by the National Park Service and Clemson University. For more detailed information, check out the report.

Microplastics on National Park Beaches
The National Park Service and Clemson University teamed up with the NOAA Marine Debris Program to collect and analyze beach sediments to assess the abundance and distribution of microplastics and microfibers on U.S. National Park beaches. This was a ‘snapshot’ study and results are based on one sampling point in time.
37 beaches were sampled at 35 National Parks, Monuments, Seashores, and Recreation Areas on the ocean and Great Lakes.
Microplastics and Microfibers were found at all 37 beaches.
Microplastic loads varied among sites. The beaches with the most microplastics were located at individual beaches in the Great Lakes and Pacific Islands.
Microbeads were found at 6 beaches.
Microplastic fragments were found at 15 beaches.
Microfibers made up 97% of debris by count.
The average number of microplastics varied from 21.3 - 221.3 pieces per kg of sand. 1 kg is about the same weight as a bag of flour.
Coastal beaches in the Southeast and Gulf of Mexico were monitored as part of a previous project and were not included in this study. For more information see Chow et al. 2016.