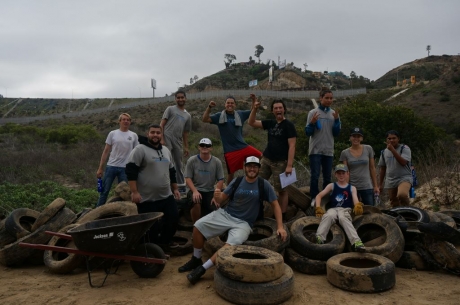 The Southwest Wetlands Interpretive Association expanded on previous efforts to address trash and marine debris in the Tijuana River Valley by improving trash capture and removal, and implementing novel outreach and prevention programs in Mexico.

Who was involved?
With funding from a NOAA Marine Debris Program, the Southwest Wetlands Interpretive Association (SWIA) worked with staff from the Tijuana River National Estuarine Research Reserve and California State Parks to address debris in the Tijuana River Valley.

What was the project and why was it important?
Trash, plastics, and larger debris that wash downstream from Mexico threaten and degrade the Tijuana River Valley’s valuable ecological, cultural, recreational, and economic resources. Huge amounts of debris can settle in the Goat Canyon sediment basin, some of which builds up behind large trash booms that were upgraded for greater strength and stability through previous funding from the NOAA Marine Debris Program. Beyond being just an eyesore and stressor on the natural environment, trash has become recognized as a public health and safety concern, as large items can clog channels and cause extreme flooding on both sides of the border during storm events.This project built off the accomplishments and lessons learned from NOAA marine debris removal grants awarded to SWIA in 2014 and 2016.

What were the project results?
Project partners captured marine debris that entered the Tijuana River Valley through the existing infrastructure located in the Goat Canyon Sediment Basin and community-based cleanup efforts during the 2018 and 2019 Tijuana River Action Month resulting in 5,541 pounds of debris removed. Together, they carried out a virtual binational solid waste and flooding event workshop in Tijuana with over 150 representatives from California and Mexico, engaged over 200 volunteers in cleanups, supported Tijuana River Action Month with local partners, and collected data to inform upstream prevention with a greater focus on tracking the types and quantities of debris captured by the sediment basin.