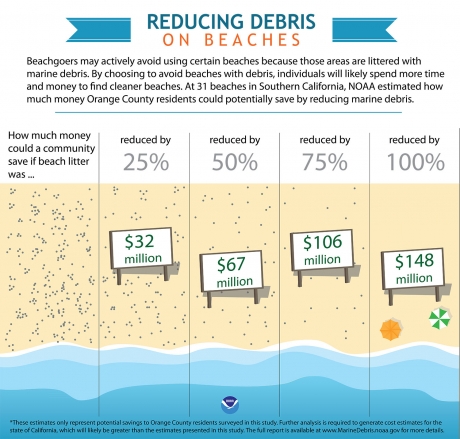 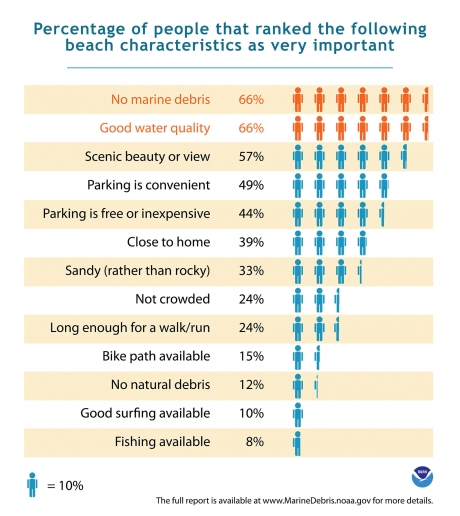 Marine debris has many impacts on the ocean, wildlife, and coastal communities. A NOAA Marine Debris Program economic study showed that it can also have considerable economic costs to residents who use their local beaches. The study found that Orange County, California residents lose millions of dollars each year avoiding littered, local beaches in favor of choosing cleaner beaches that are farther away and may cost more to reach. Reducing marine debris even by 25 percent at beaches in and near Orange County could benefit residents roughly $32 million during three months in the summer. In order to better understand the economic cost of marine debris on coastal communities, the NOAA Marine Debris Program and Industrial Economics, Inc. (IEc) designed a study that examines how marine debris influences people’s decisions to go to the beach and what it may cost them. We selected Orange County as a study location because beach recreation is an important part of the local culture and residents have a wide variety of beaches from which to choose, some of which are likely to have high levels of marine debris. We found that:

"This study shows that beachgoers are worried about marine debris and will seek out cleaner beaches for recreation at a cost," said Nancy Wallace, Marine Debris Program director. "Reducing or eliminating marine debris from our beaches is critical, because littered shorelines are costing people more than we anticipated. We can use these kinds of data to prioritize beaches for debris prevention and removal activities."

NOAA and IEc developed a travel cost model that economists commonly use to estimate the value people derive from recreation at beaches, lakes, and parks. We collected data on 31 beaches, including some sites in Los Angeles County and San Diego County, where Orange County residents could choose to visit during the summer of 2013. At each of the 31 beaches, we collected information on beach characteristics, including amenities and measurements of marine debris. Plastic debris and food wrappers were the most abundant debris types observed across all sites. Then, we surveyed residents on their beach activities and preferences through a general population mail survey. The mail survey data, beach characteristics, and travel costs were then incorporated in the model, and we were able to estimate how various changes to marine debris levels could influence economic losses to this area. For example, reducing marine debris by 75 percent from six beaches near the outflow of the Los Angeles River would benefit users of those beaches $5 per trip and increase visitation by 43 percent, for a total of $53 million in benefits. Given the enormous popularity of beach recreation throughout the United States, the magnitude of recreational losses associated with marine debris has the potential to be substantial.

Beachgoers may actively avoid using certain beaches because those areas are littered with marine debris. By Choosing to avoid beaches with debris, individuals will likely spend more time and money to find cleaner beaches. At 31 beaches in Southern California, NOAA estimated how much money Orange County residents could potentially save by reducing marine debris.