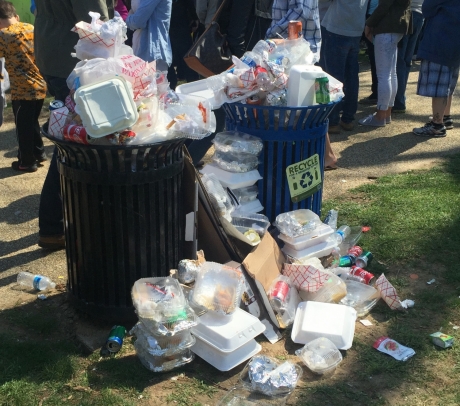 When trash is disposed of in overflowing trash cans, it can be blown into nearby waterways (Photo: NOAA).

Marine debris is a global issue and can come from many different places and activities. Learn about the different sources of marine debris.
Ocean-based Marine Debris

Learn about marine debris that comes from people at sea.

What are some examples of land-based marine debris?

Land-based debris can include trash, such as plastic bags, glass and plastic bottles, straws, cigarette butts, bottle caps, food containers and utensils, and many other things. It can be items people leave behind at the beach, or it may be items that are not properly disposed of that eventually flow into the ocean.

Although these are common types of debris to come from activities on land, it’s also possible that they could come from human activities taking place out in the ocean, or be brought to the ocean during a disaster.

How does marine debris travel from land to the ocean and Great Lakes?

Many assume that marine debris only comes from the littering or illegal dumping of large items such as couches and appliances, but there are many other ways debris ends up in the ocean. Trash created on land can be blown, swept, or washed out to sea, whether it is properly disposed of or not. In some communities where options for collecting and disposing of trash are limited or not available, large amounts of marine debris can enter the environment due to  dumping or a lack of waste management options.

Marine debris can also come from industrial sources on land, such as accidental spills of plastic pellets that are used to create larger plastic items.

It can also result from simple actions, like washing and wearing your clothing. Our clothes are often made from synthetic materials that shed microfibers, releasing them in the wash or directly into the water and air around us during normal wear.

Storm water that flows along streets or along the ground as a result of rain or snow can carry street litter and other debris into storm drains. Wind and rain can blow waste out of trash cans and move street litter. This trash can end up in lakes, rivers, and the ocean if not removed from waterways.