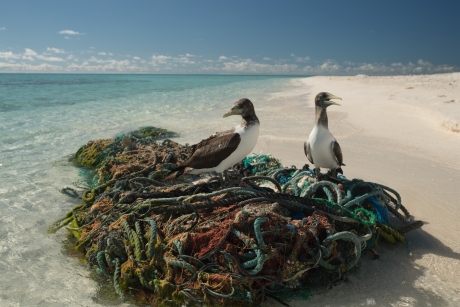 Derelict fishing nets are made of plastic and can entangle birds, such as these brown boobies (Photo: NOAA).

Marine debris is a global issue and can come from many different places and activities. Learn about the different sources of marine debris.
Land-based Marine Debris

Learn about marine debris that comes from people on land.

Marine debris can come from human activities that take place out at sea. This ocean-based debris can include fishing gear debris coming from fishing vessels, aquaculture debris, debris lost from offshore oil and gas work, trash dumped off of cruise ships, and containers that fall off of large shipping vessels that transport products across the ocean.

What are some examples of ocean-based marine debris?

Ocean-based marine debris are those items that may be dumped, swept, or blown from vessels or platforms at sea, as well as discarded, lost, and damaged fishing gear, including lines, nets, traps, pots, buoys, floats, and more. Ocean-based debris can include trash, such as plastic bags, glass and plastic bottles, and other debris that is dumped or lost off of ships or boats. Large containers full of consumer products that fall off of shipping vessels is another example of ocean based debris. Ocean-based marine debris can be accidentally lost at sea or dumped into the ocean.

What human activities in the ocean create marine debris?

Fishing gear may be lost or purposely dumped by commercial and recreational fishers. Although many fishers do not want to lose their gear, some may be lost due to storms, or because it is old and damaged. This gear may also be cut or caught on other vessels. This gear can damage habitats, entangle marine species such as seabirds and marine mammals, create boating hazards, and continue ghost fishing.

Offshore oil and gas platforms are surrounded by water, and as a result, anything that falls off of one of these structures becomes marine debris. Marine debris from these platforms can include equipment, hard hats, gloves, storage containers, and any other trash.

The ocean and Great Lakes are busy with ship traffic transporting goods and people. Many of the products we use and the food we eat travel thousands of miles on container ships every day. Sometimes these 40-foot containers can be lost in rough seas during cross-ocean travels, potentially losing goods such as sneakers, televisions, plastic toys, and lumber, which later wash up on shorelines or sit at the bottom of the ocean. These large containers can also damage other vessels and cause problems for navigation if floating at or near the surface of the water. In some areas of the world, much of the marine debris found onshore comes from passing ships where trash is thrown overboard to avoid the cost of disposal at ports. Throwing trash that contains plastic is illegal under international law.