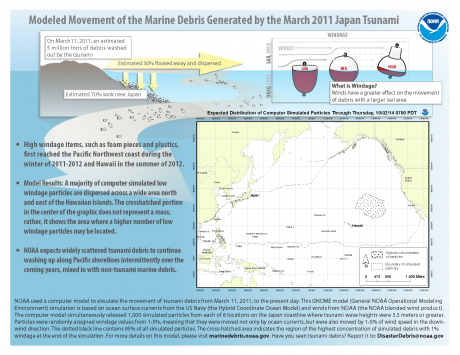 Where did the debris from the Japan tsunami go?

Following the March 2011 tsunami in Japan, the Japan Ministry of the Environment estimated that 5 million tons of debris washed into the ocean during the event. Many variables affected where Japan tsunami marine debris went and when it arrived. An estimated 70% of the debris sank near the coast of Japan, while the rest dispersed throughout the ocean. Winds and ocean currents constantly change, making it very difficult to predict where debris ended up, or when it arrived on shorelines in the United States.

In support of the ongoing response, NOAA utilized an oceanographic model called GNOME to estimate debris movement. The results showed that some buoyant items first reached the Pacific Northwest coast during winter 2011-2012. This model gave NOAA an understanding of where debris from the tsunami may be located, because it incorporated how winds and ocean currents since the event combined to move items through the Pacific Ocean. Regular updates to the GNOME model provided snapshots of where debris was at that time, but did not make future predictions for when debris would reach U.S. shores. It worked as a "hindcast," rather than a "forecast."

The model also took into account the fact that winds can move different types and shapes of debris at different speeds. For example, wind may push an upright boat, which has a large area above the surface of the water for wind to push against, faster than a piece of lumber, which is likely to float at or below the surface which means it is primarily moved by currents.

In 2015, NOAA discontinued regular updates to this GNOME model. While this effort was useful for estimating debris movement and distribution initially, in the years since the tsunami, the debris became very widely dispersed across the Pacific and more difficult to model accurately.

Understanding the movement of debris allows us to have a better grasp on how it might distribute and accumulate within our ocean and on our shores. For more information on marine debris modeling, check out our topic paper Modeling Oceanic Transport of Floating Marine Debris, which reviews the scientific literature that exists on the subject and outlines the methods that are available to apply oceanographic modeling to marine debris movement.