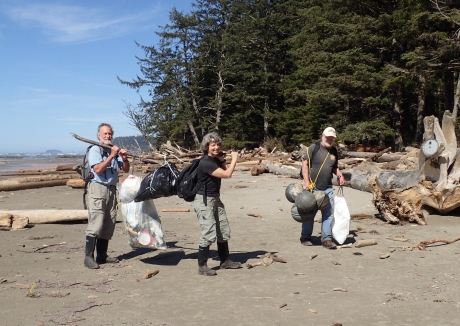 Following the 2011 tsunami in Japan, an estimated 5 million tons of debris was washed into the ocean, with 1.5 million tons of that debris remaining afloat and drifting in the Pacific. This prompted concern about the potential influx of marine debris to the Pacific coasts of the United States and Canada. Marine debris was, and continues to be, an everyday problem on these coasts, and this sudden increase prompted interest in the amounts of debris reaching shorelines, as well as the potential introduction of invasive species.

In order to observe and understand the types and amount of tsunami debris reaching U.S. shorelines, many NOAA partners and volunteers throughout Alaska, Hawaii, Washington, Oregon, and California conducted monthly shoreline surveys as part of the NOAA Marine Debris Monitoring and Assessment Project beginning in 2012. Through these monthly surveys, a study on the influx of tsunami debris found that the amount of debris on the outer coast of Washington State was significantly greater from 2013 to 2015 compared to baseline amounts of debris, increasing by as much as 10 times over what was observed before the tsunami. Among the shoreline monitoring sites from U.S. Pacific states and British Columbia, the greatest amount of debris was found in Hawaii, with an average of more than 40 debris items being deposited on a 100 meter stretch of beach per day. The tsunami debris was mixed in with regular debris, and heightened the already difficult issue of marine debris.

Monitoring partners also found that as a result of the tsunami, different types of debris were arriving on different parts of U.S. and Canadian shorelines at different times. Marine debris with high windage, those that stick out of the water and are primarily driven by wind (e.g., plastic foam and buoys), were more common on shorelines in Alaska. Items with lower windage, or those that float lower in the water and are primarily driven by currents (e.g., a piece of lumber), were more common on shorelines in Washington and Oregon. To learn more about the types and amount of debris found on Pacific shorelines, check out these NOAA studies on the influx of tsunami debris to North American shorelines, and the movement, surveillance, and impact of the tsunami debris.

Establishing a Worldwide Monitoring Protocol
Given the high level of interest in monitoring the arrival of tsunami debris, the initiative to survey shorelines following the disaster led NOAA to continue expansion of the Marine Debris Monitoring and Assessment Project (MDMAP). This citizen science initiative engages NOAA partners and volunteers across the world to survey and record the amount and types of marine debris on shorelines and helps answer questions, such as: How big is the marine debris problem, and how is it changing over time? Which debris types are most common?

Each passionate and dedicated partner in the MDMAP network selects a nearby shoreline monitoring site that they return to monthly to conduct surveys and submit meaningful data to NOAA’s MDMAP Database, which can be used to guide marine debris policy development, education and outreach, and address important research questions.

Learn more about how you can get involved at the MDMAP Get Started Toolbox!