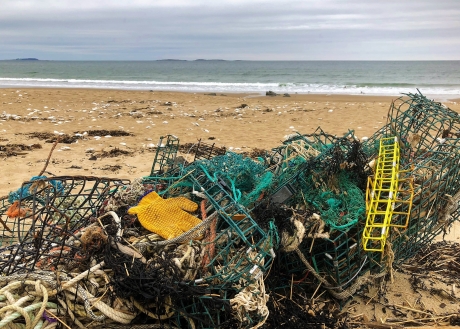 Derelict fishing line, nets, traps, and other debris on a shoreline in New England (Photo: NOAA).

What is Marine Debris?

Want to know more about marine debris? Learn more about the issue and some of the debris we commonly find.
Plastic

Learn what plastic is, why it’s a problem, and more.

Learn more about these tiny pieces of plastic that can be found throughout the ocean.

Learn about abandoned and derelict vessels and why they are a problem.

Large debris, such as derelict fishing gear, can cause huge problems for wildlife, the habitats they depend on, and the economy.

What is derelict fishing gear?

Derelict fishing gear is lost and discarded gear that is no longer under the control of a commercial or recreational fisher. It includes lines, nets, pots, traps, floats, and other equipment. Once lost or discarded in the ocean or Great Lakes, gear can continue to trap and kill fish, crustaceans, marine mammals, sea turtles, and seabirds, also called ghost fishing. Derelict fishing gear can cause other problems as well, including:

Most modern fishing gear is made of long-lasting and/or synthetic materials, such as plastic and metal, that can remain in the environment for many years. Unfortunately, some derelict fishing gear may be discarded directly or intentionally into the ocean and Great Lakes. However, many fishers do not want to lose their gear. It can be cut or caught on other vessels, break away from overuse, or become lost in storms and natural disasters.

How much derelict fishing gear is in the ocean?

We know derelict fishing gear causes big problems for our ocean, waterways, and Great Lakes, but it can be difficult to know how much is out there. There are many commercial fisheries around the world, as well as recreational fisheries, and it can be challenging to know where a particular piece of gear comes from.

We do know that the problem is widespread. A NOAA-funded study estimated that there are 145,000 derelict crab pots in the Chesapeake Bay, which can continue to kill 3.3 million blue crabs every year. This can take a lot of money away from fishers as the derelict fishing gear competes with active fishing gear for crab, and when their pots are lost they have to buy new ones. It can also impact non-target species, such as fish, turtles, and other endangered and threatened species, that can be trapped and killed in derelict crab pots.

In Hawaii, derelict fishing gear poses a significant problem for wildlife, even in the most remote parts of the Papahānaumokuākea Marine National Monument (monument), the largest fully protected marine conservation area on the planet. The monument is home to 23 species that are listed under the U.S. Endangered Species Act, including the threatened Hawaiian green sea turtle, endangered Hawaiian monk seal, and critically endangered Laysan duck. Despite being mostly uninhabited by humans, over 50 metric tons of marine debris, mostly made up of derelict fishing gear, finds its way onto the monument’s shores every year. This can severely impact these already vulnerable species.

How does the NOAA Marine Debris Program clean up derelict fishing gear?

The NOAA Marine Debris Program funds projects across the country that remove derelict fishing gear and prevent it from entering the ocean and Great Lakes in the first place. Since 2006, the NOAA Marine Debris Program has been involved in a major NOAA effort to remove marine debris from the shorelines of the Papahānaumokuākea Marine National Monument (monument). Through this project, which began in 1996, over 848 metric tons of derelict fishing gear have been removed from the monument’s shorelines.