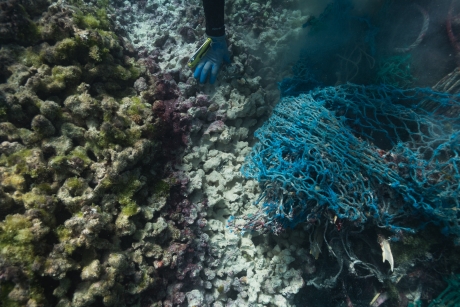 A diver removes a derelict fishing net from a coral reef in the Papahānaumokuākea Marine National Monument (Photo: NOAA).

We know that marine debris can cause serious problems for marine wildlife, but it can also damage the places they live, or their habitats. Marine debris can be found in the habitats that wildlife depend on, such as nearshore wetlands and mangroves, but it isn’t limited to these areas. Waste from human activities can even reach habitats in deep and remote places.

Marine debris can harm marine habitats in a variety of ways, including crushing or smothering sensitive plants and corals and reducing the light or oxygen that marine organisms need to survive. The movement of marine debris by tides, currents, and storms can result in repeated damage to marine habitats as more and more debris is deposited there. Researchers are working to learn more about how marine debris impacts these places.

Coral reefs are believed to have the highest biodiversity of any ecosystem on the planet. Though they’re often mistaken for rocks, corals are animals whose skeletons form the foundation of a reef. These habitats support vibrant communities of plants, fish, and other organisms. Reefs can be impacted by marine debris that can smother, crush, or break off pieces of coral. Since corals grow very slowly, recovery from any damage caused by marine debris, no matter how small, can take a very long time.

Abandoned and derelict vessels can cause further damage to coral reefs, not just from crushing them, but also by releasing fuel, anti-fouling paints, or other chemicals. These contaminants can damage or kill corals, while also releasing nutrients that encourage algae to grow more quickly and outcompete corals for space.

Because of the diversity of life found on coral reefs, these habitats are popular locations for both recreational and commercial fishing, which can result in an increased threat of lost and discarded fishing gear. Occasionally fishing gear—including lines, nets, traps, and more—can be forgotten or lost, which can smother and crush these sensitive habitats or even unintentionally catch and kill the animals that live there. A major concern is that multiple nets can form large masses that lead to intense damage to corals of many sizes. You can learn more about detecting these masses of nets on coral reefs here.

Coral reefs are also exposed to debris that travels from coastal communities. This debris might be created and dispersed by storms or carried on tidal currents. The debris can vary from large building materials, appliances, and tires, to common trash, such as plastics, cans, and other trash. Microplastics, or plastic pieces smaller than 5 millimeters, also pose a threat to corals, even if they are invisible to the eye. These tiny animals use tentacles to capture their food in the water, where they can also capture microplastics and ingest them or attach them to their surface. However, there is still more to learn about the long-term impacts microplastics have on coral reefs.

Mangroves are trees that provide protection and stabilization to coastlines and enrich coastal waters. They are habitats commonly found in tropical areas that form dense forests that both animals that live on land and aquatic wildlife depend on. Marine debris is a serious threat for these habitats, as trash, derelict fishing gear, and abandoned and derelict vessels can be trapped within the trees and their roots, blocking the movement of water.

Marine debris can also smother mangrove seedlings and decrease water quality. Abandoned and derelict vessels can crush mangrove trees and roots, as well as leak contaminants into the surrounding water. Large pieces of plastic can be trapped in the roots and branches of mangroves, while microplastics have been found in the sediments of mangrove habitats. Some of these physical impacts are plain to see, but further research is needed to determine the impacts on the wildlife living in the mangroves.

With support from a NOAA Marine Debris Removal Grant, the University of the Virgin Islands’ Center for Marine and Environmental Studies worked to remove marine debris from mangroves in the U.S. Virgin Islands. During their first Great Mangrove Cleanup in 2018, a group of 126 volunteers removed more than 3,000 pounds of marine debris from the mangroves surrounding St. Thomas, including over 1,700 plastic beverage bottles!

Salt marshes are coastal wetlands made of grasses and shrubs that are flooded and drained by salt water brought in by the tides. These areas easily trap marine debris, which tends to collect during high tide when the salt marsh is mostly covered with water and is left behind during low tide when the water drains out. Debris may be repeatedly swept away and swept back during tidal cycles, worsening its impact.

Marine debris in salt marshes can shade or crush plants, as well as block areas where grasses and other plants would normally grow. Marine debris can smother marsh soils and vegetation, preventing them from getting the nutrients they need to survive. Heavy marine debris, such as tires or wire crab pots, can break or scrape the stems of salt marsh grasses, keeping them from growing normally. The weight of these types of debris could even crush blades of grass into the muddy ground (or sediment), which could suffocate the plants. These disruptions can cause salt marsh grassesto deteriorate and possibly die.

Through a NOAA Marine Debris Removal Grant, the New York City Department of Parks and Recreation is working to remove large marine debris from an urban salt marsh in Jamaica Bay, Queens. They are also coordinating volunteers to remove smaller marine debris items, and conducting pre- and post-removal monitoring to assess the improvement of the salt marsh habitat.

Larger marine debris, such as derelict fishing gear, can be found stranded in seagrass meadows leading to damage. For example, lobster traps resting on top of seagrass for a long time may shade the seagrass. This can reduce light and the plants’ ability to photosynthesize. Derelict traps resting on seagrass can break or scrape seagrass blades, disrupting their normal function, or crush them into the sediment, suffocating them. To make matters worse, traps can move around during storms, impacting larger areas of seagrass. Lost or abandoned vessels, especially those lost during severe weather events, can also lead to damage or erosion on seagrass habitats if they remain stranded for long periods.

Because seagrasses form large canopy habitats, they can get microplastics trapped in the sediment. Microplastics can also stick to the grass blades.  This can impact the growth and performance of the plants and make microplastics more available in the  food web. We still do not know the full effect of microplastics on seagrass ecosystems.

Many kinds of wildlife call sandy beaches home, from tiny microorganisms living between sand grains to nesting birds and turtles. Plastic and other marine debris can be serious hazards for these sensitive areas, even changing the physical properties of the beach itself. Plastic marine debris on beaches causes the sand to warm more slowly, compared to beaches without plastic. These changes can impact wildlife in these habitats. To make matters worse, plastic marine debris can also accumulate and release harmful contaminants into the sand, impacting any organism that relies on it.

Oyster reefs are important features of estuarine areas, where salt and freshwater mix. Oysters are crucial shellfish species that feed by filtering huge amounts of water each day, improving water quality along the way. As they grow, oysters also build up rock-like reefs with their shells, which become important habitats and provide critical protection for shorelines from storms. Marine debris on oyster reefs can harm more than just the oysters, as there are over 300 species of animals that depend on these areas.

Any kind of large debris can harm oyster reefs when it becomes entangled in the reef. It can snag and break off important pieces of reef or injure the animals who depend on them, such as mussels, barnacles, and sea anemones. This damage can be even more complicated depending on the type of debris involved. Plastic marine debris in oyster reefs can lead to exposure to toxicants on the reef or prevent wildlife from getting the nutrients they need from the environment.

Oysters are also potentially at great risk from microplastics, or pieces of plastic smaller than 5 millimeters. These tiny threats can be easily ingested by oysters, which filter their food from water like other bivalves. With support from the NOAA Marine Debris Program, researchers from the University of Connecticut and Oregon State University are working to better understand microplastic ingestion by oysters. Researchers are using laboratory and field studies to try to learn what types of microplastics are available to oysters, and which types get ingested or rejected. Research like this can help us better protect and restore the health of oyster reefs.

Marine debris can be found in even the deepest parts of our ocean and Great Lakes. Deep water habitats are mainly made of sand, silt, or mud. Fishing nets can move these fine sediments and bury or destroy plants and animals. They can also create barriers that make it difficult for animals to return to their habitat. Plastic marine debris can smother wildlife, restricting the flow of oxygen and  greatly impacting these deep water environments. Large debris such as shipping containers can also crush habitats and leave lasting damage, not only from the physical destruction but also from releasing toxins into the sediment.

How are humans impacted by damaged habitats?

Coral reefs, seagrass beds, mangroves, and salt marshes all play an important role in protecting coastal communities from tropical storms and flooding, but this protection is limited when habitats are damaged by marine debris. Many coastal communities also rely on these habitats for food.

Coastal habitats are often an attraction for tourists. However, marine debris on beaches and other popular recreational habitats is ugly and may keep people away! In coastal communities that are dependent on tourism, this can have a huge impact on the economy.