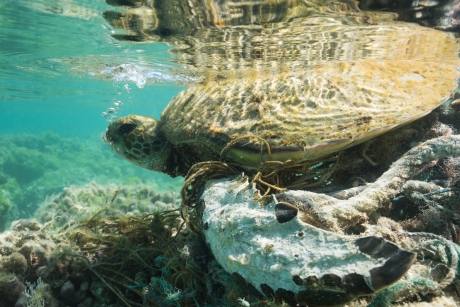 A turtle caught in a derelict fishing net off of Pearl and Hermes Atoll (Manawai, Holoikauaua) in the Papahānaumokuākea Marine National Monument (Photo: NOAA).

Learn how marine debris causes problems for wildlife, their habitats, and people.
Ingestion

Marine debris can cause a lot of problems for people and the environment, but it especially impacts wildlife. Animals can get caught in commonly found marine debris, such as plastic packing bands, six pack rings, balloon strings, the handles of plastic bags, and derelict fishing gear.

What happens when animals are entangled in marine debris?

Entanglement of wildlife in marine debris is a global problem that affects hundreds of species, including marine mammals, sea turtles, birds, and fish. When animals are caught in marine debris it can be difficult to swim and feed, cut into their bodies, and potentially lead to death.

Wildlife are commonly entangled in lost fishing nets, line, and other gear, as well as plastic packing bands, balloon strings, plastic bags, and more. A study conducted by the Ocean Conservancy and Australia’s Commonwealth Scientific and Industrial Research Organisation (CSIRO) surveyed experts and rated marine debris items that are most harmful to wildlife. The study showed that derelict fishing gear posed the greatest entanglement threat to wildlife, followed by plastic bags and balloons.

What is ghost fishing?

Derelict fishing gear, or gear that is lost or abandoned, is a common type of marine debris. Once in the ocean, derelict fishing gear can trap fish, crustaceans, birds, and other animals that are not meant to be caught. It can be especially harmful to vulnerable populations, such as endangered and protected species, including turtles and marine mammals.

Once fishing nets, lines, buoys, traps, and other gear are out of the control of a fisher, they can continue to “ghost fish” marine wildlife, catching and potentially killing the animals that come into contact with it. The most common types of derelict fishing gear to ghost fish are gillnets and pots or traps, but other types of fishing gear, such as longlines and trawls, can also ghost fish if they are lost or discarded. This ghost gear can also collide and entangle with other gear, creating larger and larger masses of nets, buoys, and lines.

Ghost fishing can also impact our economy. Lost lines, nets, and traps not only cost fishers money to replace, but can also compete with active fishing gear. As part of a study funded by the NOAA Marine Debris Program, a team of researchers found that 3.3 million blue crabs are killed in derelict crab pots in the Chesapeake Bay, as well as more than 40 species of fish that are not the target of the traps. Using a model, the researchers found that by removing derelict crab pots from some of the most popular fishing areas in the bay, harvest of blue crabs could be increased by 38 million pounds.

Luckily, ghost fishing and entanglement by other marine debris can be prevented. The NOAA Marine Debris Program has partnered with fishers and organizations across the United States to remove existing derelict fishing gear and prevent the introduction of new gear into the environment. Learn how you can help stop marine debris on our How to Help page.