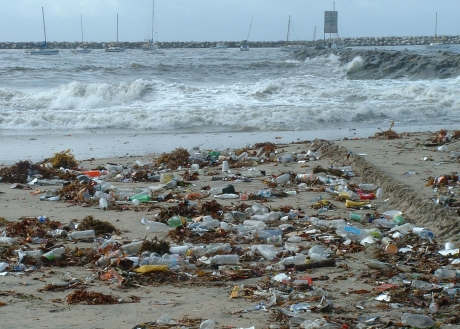 Plastic bottles, foam cups, food wrappers, and other debris on a beach can deter tourists (Photo: Heal the Bay).

Marine Debris and the Economy Fact Sheet
TRASH TALK: How Does Marine Debris Impact the Ocean, Animals, and Me?
Report: The Effects of Marine Debris on Beach Recreation and Regional Economies in Four Coastal Communities
Report: Assessing the Economic Benefits of Reductions in Marine Debris in Orange County, CA
Report: Ecological and Economic Effects of Derelict Fishing Gear in the Chesapeake Bay

Marine debris can be dangerous for wildlife, damage sensitive habitats, and create safety and navigation hazards. But marine debris can also hurt the economy. Marine debris can keep tourists away from beaches, compete with active fishing gear, and reduce commercial catches.

How does marine debris impact the economies of coastal communities?

In the United States, the tourism and recreation sector is the largest employer in the ocean and Great Lakes economy. Marine debris littered on beaches can not only degrade the beauty of the environment but may also prevent tourists from spending their time and money in coastal communities that rely on tourism. Local governments and volunteer organizations also spend their limited resources to clean it up.

Marine debris can decrease the number of days visitors spend on beaches, resulting in fewer tourism dollars spent and thus decreasing local jobs. A NOAA-funded study found that doubling the amount of marine debris on beaches in coastal Alabama resulted in an estimated decrease of 1 million visitor days, a loss of $113 million tourism dollars spent in communities, and a decrease of nearly 2,200 jobs.

On the other hand, decreasing marine debris on our shorelines can increase tourism-related spending and jobs. For example, the study found that reducing marine debris to almost zero in Ohio was estimated to produce an additional $217 million tourism dollars and over 3,700 jobs.

With support from the NOAA Marine Debris Program, a multi-faceted education campaign with The Ohio State University is tackling marine debris prevention with visitors to a popular tourist destination - South Bass Island and the village of Put-in-Bay, Ohio. By preventing single-use items from entering Lake Erie, tourists will benefit both the natural environment and the tourism industry by keeping island beaches and natural areas free from debris.

How do the economic impacts of marine debris affect me?

Marine debris on beaches could also be costing you money. In a study funded by the NOAA Marine Debris Program, it was found that the presence of debris on beaches influences our decisions to go to a beach littered with debris, or spend money seeking out a cleaner spot. The study surveyed residents in Orange County, California, to understand what features are most important when they consider visiting a beach. Some of those factors include a scenic view, convenient parking, the distance from their home, and whether or not the beach is suitable for recreational activities like surfing or fishing. However, most important to residents was that no marine debris is on the beach and the water is clean.

In order to find a clean beach, residents of southern California find themselves travelling farther from their local beaches and spending more money. Overall, this results in losses of millions of dollars to beachgoers every year. By reducing marine debris on beaches by just 25 percent, Orange County residents could save roughly $32 million during summer months by decreasing travel distances to enjoy the beach.

How does marine debris cause problems for fishers?

The NOAA Marine Debris Program funds projects that work with local commercial fishers to remove derelict fishing gear. The commercial fishers earn money outside of the fishing season by helping to remove the derelict fishing gear, while also benefiting the environment. In Alaska, the Island Trails Network runs a voluntary program that pays set-net fishers to remove marine debris from coastlines near their respective fishing sites during fishing closures. Through this project, nearly 14 metric tons of debris have been removed to date. In North Carolina, the North Carolina Coastal Federation hired local fishers during the closed season to recover over 45 metric tons of derelict crab pots. In New Jersey, Stockton University hired local crabbers to remove derelict traps and return reusable traps to their owners, resulting in over $80,000 in direct and indirect economic benefits to commercial industry partners over several years of work.

The NOAA Marine Debris Program supported a project to work with take-out food businesses in Santa Clara County, California, to identify opportunities to voluntarily reduce the use of commonly littered food and beverage packaging while reducing costs to the restaurants. These small, locally owned businesses made some incredible changes. Together, they:

Consumers are ready to back these efforts as well. Another project supported by the NOAA Marine Debris Program found that 60% of people are willing to spend an extra $0.40 per meal to support plastic-free alternatives.

Learn how you can help to reduce food and beverage single-use packaging on our How to Help page.

How does the NOAA Marine Debris Program help?

In order to reduce the economic impacts of marine debris, the NOAA Marine Debris Program funds projects that benefit commercial and recreational fisheries, small businesses, and coastal communities by preventing marine debris from entering the marine environment in the first place and removing existing debris from shorelines and coastal areas. You can learn more about our prevention and removal projects on the Our Work page.