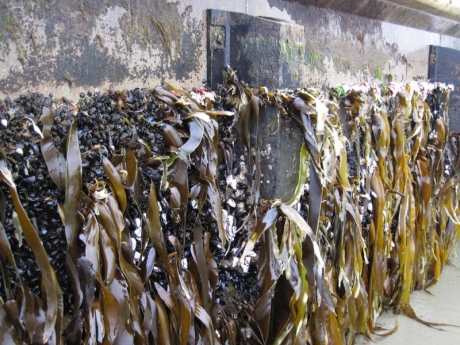 Over 60 species of native to coastal Japan were found on this derelict dock that washed up on Agate Beach in Newport, Oregon (Photo: Oregon State University, Hatfield Marine Science Center).

Report: Marine Debris as a Potential Pathway for Invasive Species
Report: Response to the Misawa Dock on the Washington Coast
TRASH TALK: How Does Marine Debris Impact the Ocean, Animals, and Me?

For nearly as long as there has been life on this planet, wildlife has traveled on ocean currents to new areas. Marine debris also travels these currents, and may be bringing non-native “hitch hikers” with them, letting wildlife travel to places they could never reach before. Although some non-native species that travel to a new area do not spread and become harmful, some species can become invasive, upset the balance of the ecosystem, and cause serious problems for the other plants and animals that live there.

What happens when wildlife travels on marine debris?

Once in the ocean, our trash travels. Human-made debris takes far longer to break down than natural debris, meaning the species that attach themselves to our trash can travel further and for longer periods of time than ever before. This could allow non-native and potentially invasive species to reach places they would not have normally reached.

Large pieces of debris, such as vessels and debris from natural disasters, can hold many different types of animals and plants on their surface, bringing with them multiple potentially invasive species. After the 2011 tsunami in Japan, marine debris began washing up on shorelines along the Pacific Coast of the United States and Canada. In 2012, a floating dock that was dislodged from the Port of Misawa in Japan during the tsunami washed up on the shores of Oregon. The dock was covered in more than 400 pounds of animal and plant life, representing a community of 60 species native to coastal Japan, including wakame kelp, a known invasive species on the West Coast of the United States.

Only time will tell if a non-native species will successfully invade a new area and become invasive because they were brought there by marine debris. As more and more debris enters our ocean, waterways, and Great Lakes, there are more opportunities for non-native species to hitch rides to new areas. Once a new species is established, has spread, and is considered invasive, it becomes very difficult to remove, can cost countries billions of dollars each year to control, and can compete with native species for resources, such as sunlight, space, food, and more.

Together we can stop marine debris and stem the tide of non-native and invasive species! You can help slow the spread by reducing the amount of waste you produce, picking up trash you see outside, and joining efforts in your community to reduce debris. Learn more on our How to Help page.

To learn more about marine debris and invasive species, check out this Marine Debris Program Report on Invasive Species.