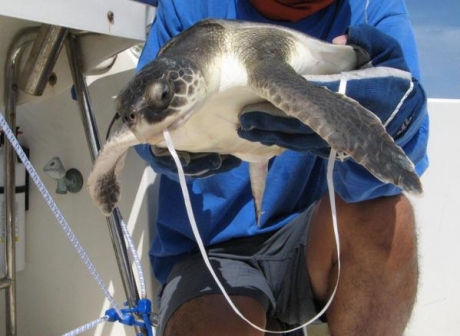 Report: Occurrence and Health Effects of Anthropogenic Debris Ingested by Marine Organisms
TRASH TALK: How Does Marine Debris Impact the Ocean, Animals, and Me?

Animals have been eating, or ingesting, plastic and other marine debris for a long time. The ingestion of plastic by wildlife was first observed in 1966, when researchers found plastic container lids and toys in dead Laysan albatross chicks. These observations happened more than 20 years before the Great Pacific Garbage Patch was discovered. A review by Kuhn and van Franeker found that over 700 species, including seabirds, fish, turtles, and marine mammals, have been confirmed to eat plastic. That number will likely increase over time as wildlife continues to encounter our trash.

Debris items may be mistaken for food and ingested, or may be accidentally ingested when mixed with or attached to an animal's natural food. Because many plastics float, break into small, easily eaten pieces, and are colorful, they are more likely to attract hungry animals than other types of marine debris. Eating plastic may lead to loss of nutrition, internal injury, intestinal blockage, starvation, and even death. We know that ingested plastic is harmful to animals, and research is still being conducted to figure out all the effects, especially to communities and wild populations.

What happens when an animal eats plastic?

Plankton, shellfish, birds, fish, marine mammals, and sea turtles from all parts of the globe and from various depths of the ocean have been confirmed to ingest plastic debris. The amount and type of plastic they eat often relates directly to the animal’s feeding behavior. Passive feeders, or animals that filter their food from water or soil, may unintentionally eat microplastics with their food. Animals that are active feeders, that search for and capture their food, ingest plastic not only accidentally while feeding, but also any debris inside of their prey.

Plastic can also carry harmful pollutants. They may absorb pollutants that are in the water around them, or release chemicals that are added to plastics during production to make them colorful or flexible. These chemicals may enter the body of an animal if ingested. Whether an animal eats the plastic itself, or eats an animal that has already eaten plastic, there could be possible health impacts on marine wildlife. Although wildlife may be exposed to these contaminants from plastics, more research is needed to understand how they might be affected, depending on the size of the plastics and how long they stay in an animal.

How does plastic marine debris impact different types of animals?

Sea Turtles: All seven species of sea turtles have been confirmed to eat marine debris. Sea turtles most commonly try to eat plastic sheeting and plastic bags, which may resemble their jellyfish prey. This type of debris can get stuck in their digestive system, making them feel full. Since they no longer feel hungry, they lose the urge to feed which can lead to poor nutrition and starvation. A review by Kühn and van Franeker estimated that 32% of turtles have plastic marine debris in their stomachs. Learn more about how ingesting marine debris affects turtles with the University of North Carolina Wilmington’s MarineQuest Turtle Trash Collectors Interactive Video.

Birds: The impacts of marine debris to birds are well studied. A review by Kühn and van Franeker found that over 40% of seabird species studied have ingested plastic. Albatrosses, fulmars, and shearwaters are among the seabird species that may be most affected by marine debris as it can get stuck entering their gizzard or in their gizzard, a section of the stomach that grinds food, and cannot easily pass through the digestive system. Laysan albatross chicks that ingested large amounts of plastic have been found to have lower weights, as the plastic in their stomach keeps them from eating a full meal. Adults not only build nests using collected debris, but pass any ingested debris on to their offspring when the chicks are fed.

How does plastic ingestion affect the food web?

Plastics that are transported by surface currents will collect more debris in areas where currents meet, called convergence zones. In these areas, there are lots of nutrients, and the algae and phytoplankton at the base of the complex marine food web gather here. As areas with readily available food sources, they attract marine life across the food web, from tiny zooplankton to large marine mammals. Larger amounts of marine debris also collect in these areas where animals are most likely to look for food and feed, increasing the likelihood that they may accidentally eat plastics and marine debris.

Although some animals may be more likely to eat plastic than others, this material can stay in their bodies for a long time, and may even travel through the food web. An example of how plastics can move through the food web starts with algae. Algae can stick and grow on floating microplastics. Filter feeders like oysters, scallops, and mussels then eat the algae and the microplastic at the same time. From there, the little bits of plastic may travel all the way up the food chain, from blue crabs, to small fish who are eaten by large predators such as seals, sharks, and dolphins.

Plastics can also carry harmful pollutants or absorb pollutants and/or chemicals that are in the water around them. They can also release these chemicals into the water or sediment around them. However, more research is needed to better understand how chemicals can move through the food web and impact wildlife.

How can I help prevent wildlife from eating plastic?

To prevent marine debris, we need to understand where it is coming from. It’s hard to identify specific sources, but we know that marine debris can enter our waterways and ocean in a variety of ways. Preventing marine debris is key to solving the problem over time and you can learn more about How to Help.