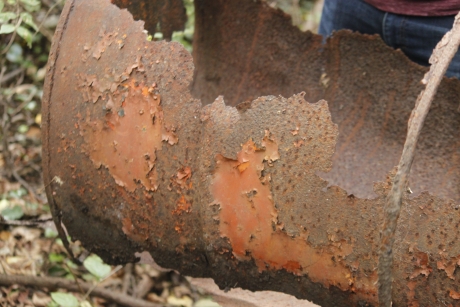 Some debris, like this rusted barrel removed from Kingman Island in DC, can be sharp and dangerous for people (Photo: NOAA).

TRASH TALK: How Does Marine Debris Impact the Ocean, Animals, and Me?

We know marine debris can cause problems for wildlife and the places they live, but it can also potentially affect the health of people. Marine debris on a beach could be dangerous if it is sharp, if it contains or is made of hazardous substances, or if children interact with it while playing. Larger debris could be dangerous to recreational boaters. For example, boaters may collide with debris that is under water, potentially causing damage to the vessel or injuries to people on board from the impact or removal. There could also be plastic in the seafood we eat, as well as chemicals that attach to the plastics. However, the actual environmental and health risks associated with different plastics and their associated chemicals to both marine wildlife and humans remain largely unknown.

Is there plastic in our food and water?

Microplastics, or tiny pieces of plastic 5 mm and smaller, have been found in the air, tap water, sea salt, bottled water, beer, and in the species of fish that we eat. In a study of 16 different brands of sea salt that we eat, all were found to contain microplastics. However, scientists don’t yet know if eating, drinking, or inhaling microplastics is harmful to our bodies, or how much we would need to ingest or inhale before it starts hurting us.

Can plastics in seafood harm my health?

What about chemicals in seafood from microplastics?

It is possible for plastics to pick up toxins in the environment and later release them. Plastics can also release harmful chemicals that have been added during their manufacture to give them color and make them more flexible. Microplastics have been found in the stomachs of many different types of wildlife, from the smallest species of plankton to large whales.

Lab studies have shown that eating microplastics can have health effects on clams, oysters, and species of lobsters. We are still trying to understand if toxins and chemicals associated with plastics have an impact on the animal that eats the plastic. There is also ongoing research to determine whether these contaminants may travel through the food chain, and if there is any impact on human health.

What is the NOAA Marine Debris Program doing about the human health impacts of marine debris?

Recently funded research has focused on understanding what happens when fish and other wildlife eat microplastics, including a current study on whether eating microplastics makes Pacific Northwest steelhead trout more vulnerable to disease. More information on these and other research projects can be found on the Research page.